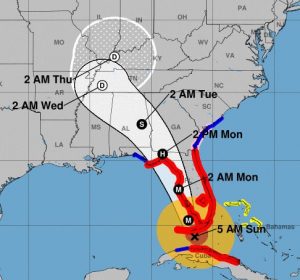 8:00AM IRMA update, NHC Advisory #45A. Irma slowed to a CAT 4 as she crossed Cuba.  Changes from last advisory in red.

The center of Irma is about to make landfall in the lower Florida Keys. Maximum sustained winds of 130 moving NNW at 8mph (down from 9mph.)  The pressure is 929 (up from 928 — up is good!) The lower the pressure, the more powerful, the more potential for tossing stuff around.

We have a storm surge warning of up to 8 feet (will affect us if it comes our way at high tide tonight 11:36pm or high tide Monday morning 12:17pm.)

All of Florida is going to get hurricane force (74 mph+) winds as it passes your area. Florida homes are built for this. NHC reports the eye of Irma should move over the Lower Florida Keys shortly, and then move near or over the west coast of the Florida Peninsula later today through tonight.  Irma should then move inland over northern Florida and SW Georgia Monday afternoon. Irma should then move inland over the Florida panhandle and southwestern Georgia Monday afternoon. Hurricane (74mph+) and tropical storm conditions (39mph+) are possible in central and north Florida by Sunday.

Hurricane-force winds extend outward up to 80 miles from the center.  Tropical storm force winds extend out up to 220 miles (up from 205 miles.) <3 Florida is only 160 miles wide so we’re all going to get at least 74mph winds for the maybe 12 hours it takes her to pass. <3 No need to freak out if you’re shuttered up. Lock windows if not, if you can get something to cover the window (dresser, etc.) then do, close interior doors. Put electronics on tables in case you get some water. Remember the storm will slow as she crosses land.

Now in the Keys — 330 miles south of Melbourne — but only moving NW at 6mph, by the time Irma gets to the Everglades and Naples,  we in Melbourne/Palm Bay will begin feeling the hurricane force (74mph+) winds – it could be as early as 10am

So the outlook is positive for our area, we’re still looking good for an easy passage. Plan to be inside by 10am Sunday, you’ll be there until Irma passes us Monday afternoon.

Local friends follow WFTV Chief Meteorologist Tom Terry, he predicted Matthew going west off our coast a new hours before it did.

Utility workers are on standby to deploy to each area as soon as Irma passes thru. You’ll see the convoys of their vehicles from all other states and they’ll flood into each area and get you restored in short order. Wave to them when you see them on the road, they are our heroes!

This storm can also dissipate at any moment, it happens all the time. STAY HOPEFUL. This is a good time to remind yourself of your best storm experiences instead of the worst.

RELATED: SUNDAY 5:00AM IRMA update, NHC Advisory #45
IRMA 5:00PM update, NHC Advisory #43
IRMA 8:00AM update, NHC Advisory #41-A
Irma should pass us Sunday
After what Hurricane Irma did to the Caribbean, we’ll be fine
Irma may hit near Miami Sunday, near Atlanta Monday
Andrea’s experiences with hurricanes and tropical storms
Here’s what the world’s most accurate weather model predicts for Irma
Mandatory evacuation, surviving Hurricane Frances, being the Vision Keeper
Be a vision keeper during the hurricanes
The phases of the moon drive hurricane behavior
Don’t add to the fear about hurricanes
Mild winter = mild hurricane season
Remember an active hurricane season doesn’t mean any will make landfall
I emailed news stations about a no cost plan for viewers to help with the hurricanes; global coherence
My Facebook posts for the Hurricane Matthew timeline