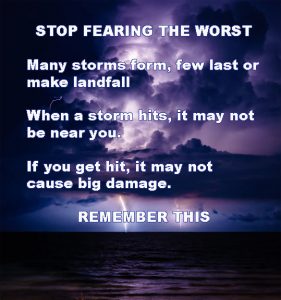 When they say a storm is 500 miles wide and 185 mph, that doesn’t mean the entire storm is moving 185 mph. Example:
Hurricane Irma in Sept 2017, the eye was 60 miles in diameter. A FEW MILES OUTSIDE of that is where the 185 mph winds are. NOT all 500 miles.  Hurricane Irma downgraded below a Cat 1 as she crossed land — as they do — here in Melbourne/Palm Bay we got 60 mph winds and 90 mph gusts. Florida is only 160 miles wide so we all got high winds for the maybe 12 hours it took her to pass. I’ve lived in Florida all my life and I’ve been through several hurricanes and tropical storms. It’s easy to get caught up in the news hype about approaching storms, so I like to have a reminder here on my blog of the notable storms I most recently recall. My worst experience:

I was home through Hurricane Jeanne on 9-24-04, a category 3 hurricane moving 12 mph, which hit 60 miles south of me and had winds of 115 all night long. I lost power about midnight and was without power for ten days. Just three weeks before, Hurricane Frances hit us and I lost power for 10 days as well. A big oak came down on my back porch during Jeanne. I didn’t hear it since a storm roars loudly, like you’re under an airplane and a train is riding past at the same time. I felt safe inside the house. Burglar bars on all the windows help protect from flying debris, but I shutter them as well. Here are the details of the other storms that affected my area, and at the end are helpful links. I would not feel nervous about staying in my home again through a hurricane with sustained winds of 115mph. The worst I fear is losing power since it means no a/c, no water, phone or internet, and possibly limited cell phone use. 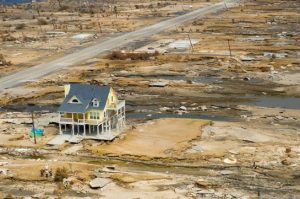 Remember, no matter what is going on, you can have a completely different experience than friends just inches away.  I think this is a very comforting photo and it happens all the time after all sorts of disasters. There are some left standing. I intend to be among those left standing. I don’t mind being in the cone of uncertainty as long as I remember that I’m also in the hands of God.

Category 4  On 9-10-1960 Hurricane Donna hit Marathon, FL with 130 winds at landfall, then bounced between 130-145 winds as it made it way up the coast. It got to NC as a Cat 2 with 100 mph winds. I was ten, I recall my folks made it sound like a fun adventure. My dad walked next door during the eye of the hurricane to chat with our neighbor Mr. Jones.

Category 2   On 9-04-04 Hurricane Frances landed at WPB/Fort Pierce w/105mph winds at landfall, moving 7mph. Range was 85 miles from eye (got us) Cat 2. I left home before Hurricane Frances (which hit about 80 miles south of me, winds 105 mph) and I drove to Lake City, FL to ride it out.  I had no big damage and lost power for ten days after.

Category 3   On 9-24-04 Hurricane Jeanne landed at Stuart/Fort Pierce w/115mph winds at landfall, max gusts 120 and moving 12mph. Range was 45 miles from center (she got us) Cat 3. I stayed home for Hurricane Jeanne, which hit 60 miles south of me.  Winds were 115 mph and the storm roared all night.  My big oak in the backyard came down on my back porch but I heard none of it, it was all so loud.  I lost power about midnight, but by then, 9-25-04, the weather had cooled considerably so I was comfortable without the a/c on.  I was without power another ten days after Jeanne. I didn’t know the tree came down in the backyard until I unboarded the back sliding glass door. There was only minimal damage (from flying debris) at my mobile home in a park 3 miles away, however the home behind mine was damaged.

The Saffir-Simpson Hurricane Scale is a 1-5 rating based on the hurricane’s present intensity. This is used to give an estimate of the potential property damage and flooding expected along the coast from a hurricane landfall. Wind speed is the determining factor in the scale, as storm surge values are highly dependent on the slope of the continental shelf and the shape of the coastline, in the landfall region. Note that all winds are using the U.S. 1-minute average.

Category One Hurricane:
Winds 74-95 mph (64-82 kt or 119-153 km/hr). Storm surge generally 4-5 ft above normal. No real damage to building structures. Damage primarily to unanchored mobile homes, shrubbery, and trees. Some damage to poorly constructed signs. Also, some coastal road flooding and minor pier damage. Hurricane Lili of 2002 made landfall on the Louisiana coast as a Category One hurricane. Hurricane Gaston of 2004 was a Category One hurricane that made landfall along the central South Carolina coast.

Category Two Hurricane:
Winds 96-110 mph (83-95 kt or 154-177 km/hr). Storm surge generally 6-8 feet above normal. Some roofing material, door, and window damage of buildings. Considerable damage to shrubbery and trees with some trees blown down. Considerable damage to mobile homes, poorly constructed signs, and piers. Coastal and low-lying escape routes flood 2-4 hours before arrival of the hurricane center. Small craft in unprotected anchorages break moorings. Hurricane Isabel of 2003 made landfall near Drum Inlet on the Outer Banks of North Carolina as a Category 2 hurricane. Hurricane Frances of 2004 made landfall over the southern end of Hutchinson Island, Florida (80 miles south of me) as a Category Two hurricane. I evacuated for Frances due to the heat knowing the power would go out. I had no real damage but lost power for ten days. My mobile home 3 miles away sustained no damage. Twenty days later, Hurricane Jeanne (a Category 3) would hit.

Category Three Hurricane:
Winds 111-129 mph (96-112 kt or 178-208 km/hr). Storm surge generally 9-12 ft above normal. Some structural damage to small residences and utility buildings with a minor amount of curtainwall failures. Damage to shrubbery and trees with foliage blown off trees and large trees blown down. Mobile homes and poorly constructed signs are destroyed. Low-lying escape routes are cut by rising water 3-5 hours before arrival of the center of the hurricane. Flooding near the coast destroys smaller structures with larger structures damaged by battering from floating debris. Terrain continuously lower than 5 ft above mean sea level may be flooded inland 8 miles (13 km) or more. Evacuation of low-lying residences with several blocks of the shoreline may be required. Hurricanes Ivan and Jeanne of 2004 were Category Three hurricanes when they made landfall in Alabama and in Florida, respectively. Jeanne hit 60 miles south of me. I stayed home during Jeanne and had a tall oak come down onto my back porch, and enough (not apparent to me) damage to roof tiles that they replaced my 20 year old roof. I lost power about midnight and was without it for ten days. My mobile home 3 miles away sustained minimal damage from flying debris. The news sky footage of  our area after Jeanne showed all blue tarp roofs for up to a year afterward.

Category Four Hurricane:
Winds 130-156 mph (113-136 kt or 209-251 km/hr). Storm surge generally 13-18 ft above normal. More extensive curtainwall failures with some complete roof structure failures on small residences. Shrubs, trees, and all signs are blown down. Complete destruction of mobile homes. Extensive damage to doors and windows. Low-lying escape routes may be cut by rising water 3-5 hours before arrival of the center of the hurricane. Major damage to lower floors of structures near the shore. Terrain lower than 10 ft above sea level may be flooded requiring massive evacuation of residential areas as far inland as 6 miles (10 km). Hurricane Charley of 2004 was a Category Four hurricane made landfall in Charlotte County, Florida with winds of 150 mph. Hurricane Dennis of 2005 struck the island of Cuba as a Category Four hurricane.

Category Five Hurricane:
Winds greater than 157 mph (137 kt or 252 km/hr). Storm surge generally greater than 18 ft above normal. Complete roof failure on many residences and industrial buildings. Some complete building failures with small utility buildings blown over or away. All shrubs, trees, and signs blown down. Complete destruction of mobile homes. Severe and extensive window and door damage. Low-lying escape routes are cut by rising water 3-5 hours before arrival of the center of the hurricane. Major damage to lower floors of all structures located less than 15 ft above sea level and within 500 yards of the shoreline. Massive evacuation of residential areas on low ground within 5-10 miles (8-16 km) of the shoreline may be required. Only 4 Category Five Hurricanes have made landfall in the United States since records began: The Labor Day Hurricane of 1935, Hurricane Camille (1969); Hurricane Andrew in August 1992 and Hurricane Patricia October 23, 2015.

Meteorologists use a metric unit for pressure called a millibar and the average pressure at sea level is 1013.25 millibars.

1935 With only 892 millibars of central barometric pressure, the Labor Day Hurricane struck the Florida Keys in 1935 and was classified as a Category 5.

Category 5 Hurricane Charley made landfall in Punta Gorda, Florida at 150 mph, in 2004 with a central pressure of 941 millibars.

Category 3 Hurricane Katrina: Although it was classified as a strong Category 3 storm, Hurricane Katrina at 920 millibars caused widespread devastation along many areas of the central Gulf Coast and had the third lowest central pressure ever recorded.

Category 5 Hurricane Matthew formed 165mph winds at 963 millibars. Winds died to 145 as it crossed Cuba and the Bahamas. Winds died down even further as it moved up the east coast, bringing 109 winds to Brevard county on 10-6-16.

Category 4 Hurricane Ida came ashore at at Port Fourchon at 150 mph as a powerful Category 4 hurricane at 930 millibars, then weakened to a Category 1 storm with maximum sustained winds of 95 mph a few miles to the north, near Galliano.

RELATED:
Andrea’s experiences with hurricanes and tropical storms
Mandatory evacuation, surviving Hurricane Frances, being the Vision Keeper
Be a vision keeper during the hurricanes
The phases of the moon drive hurricane behavior
Don’t add to the fear about hurricanes
Mild winter = mild hurricane season
Remember an active hurricane season doesn’t mean any will make landfall
I emailed news stations about a no cost plan for viewers to help with the hurricanes; global coherence
My Facebook posts for the Hurricane Matthew timeline