My updates are focused on Palm Bay/Melbourne. Click the links to read the full advisory yourself to see what applies to the area you’re in. The National Hurricane Center 8:00pm Advisory 39A shows Irma near the Florida Keys Sunday morning. Hurricane force winds (above 74mph) extend outward up to 70 miles from the center. Tropical storm force winds (below 74mph) extend outward up to 185 miles. We’re now under hurricane watch as well as storm surge watch. A Storm Surge Warning means there is a danger of life threatening inundation, from rising water moving inland from the coastline, during the next 36 hours in the indicated locations. For a depiction of areas at risk, please see the National Weather Service Storm Surge Watch/Warning Graphic, available at http://hurricanes.gov.  A Storm Surge Watch means there is a possibility of life-threatening inundation in the indicated locations during the next 48 hours.

Storm surge: if the peak surge occurs at the time of high tide (high tide Sunday is 11:23am and 11:36 pm) then storm surge from Ponce Inlet to Jupiter Inlet could be 3 to 6 ft. We may get rainfall up to 10 inches.

Beginning early morning Sunday we’ll get wind speeds between 74 – 110 mph with the highest overnight.  Florida houses are built for this. We got 109 winds with Matthew and we were fine. There was no flooding and our power was out only 3 days.

Maximum sustained winds have dropped to 155,  down from 185, and are moving W at 12mph, down from 16mph. Pressure is 924 mb, down from 927.  The lower the pressure, the more powerful, the more potential for tossing stuff around. 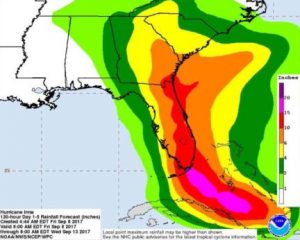 Meteorologist extraordinaire James Spann says landfall Miami after midnight Saturday. Spann gives this  image showing projected rain over the next 5 days as a result of Hurricane Irma. It looks like up to 10 inches for us. (Whew, relief!) His 11:00am Facebook post just now (James on FB here) says hurricane force winds are likely in Orlando Sunday and Sunday night with the potential for structural damage there. The most severe storm surge and wind damage will be along Florida’s East Coast… from Miami up to Jacksonville. Structural damage is likely along with storm surge flooding. Widespread power outages are expected. Yes, we’re 10 miles inland from the coast but there’s a river between us, too. Irma will begin slowing as she moves across land and warm waters.  We’ll be on the other side of this by Monday night with very little damage. The latest minimum central pressure reported by both Air Force and NOAA Hurricane Hunter planes was 927 mb.

Power and utility companies are on standby to deploy to each area as soon as Irma passes thru. You’ll see the convoys of their vehicles from all other states and they’ll flood into each area and get you restored in short order. We went 8 days each in August and September 2004 after Hurricanes Frances and Jeanne for power to be restored. Last year after Hurricane Matthew we had power within 3 days.

RELATED: After what Hurricane Irma did to the Caribbean, we’ll be fine
Irma may hit near Miami Sunday, near Atlanta Monday
Andrea’s experiences with hurricanes and tropical storms
Here’s what the world’s most accurate weather model predicts for Irma
Mandatory evacuation, surviving Hurricane Frances, being the Vision Keeper
Be a vision keeper during the hurricanes
The phases of the moon drive hurricane behavior
Don’t add to the fear about hurricanes
Mild winter = mild hurricane season
Remember an active hurricane season doesn’t mean any will make landfall
I emailed news stations about a no cost plan for viewers to help with the hurricanes; global coherence
My Facebook posts for the Hurricane Matthew timeline