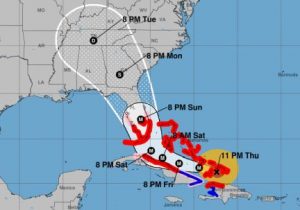 It is looking more and more as though Irma will be a repeat of Hurricane Matthew last year, which was very doable. The latest news has Irma dropping speed, down to 165 from 185, and landing near Miami sometime Sunday. NHC says about 8pm, James Spann says just after midnight Saturday. We’ll know more in 24 hours. It looks now like she’ll go up the center of the state to land as a Cat 2 near Atlanta.

Hurricane force winds extend outward up to 75 miles from the center, and tropical-storm-force winds extend outward from up to 185 miles from center. That means here in Melbourne we will have high winds beginning about an hour after landfall Sunday, with winds of up to 110 overnight. Last year we had hurricane Matthew who began is a Cat 5 and only had winds of 109 by the time he passed right over us. I’m hopeful.

The 11:00 pm advisory says winds have dropped,  she’s now fluctuating between a 4 and a 5, hurricane watches and warnings are all from Sebasian Inlet south.  Note when they talk about storm surge, the water is expected to reach the following heights above ground *** IF the PEAK SURGE occurs at the time of HIGH TIDE *** (Sebastian Inlet to Bonita Beach, including Florida Keys…5 to 10 ft.) High tide Sunday Sept 10 is 11:36pm.

Here’s the 3:09pm update from “the world’s most accurate weather model:  https://arstechnica.com/science/2017/09/destination-florida-how-confident-we-can-be-in-hurricane-irmas-track/

And from James Spann, AMS certified media meteorologist, “NAM shows a devastating hit for Miami after midnight Saturday night. Orlando could see hurricane force winds during the day Sunday.” We’re a little east of there. Right now NHC has Irma landing near Miami Sunday morning as a Cat 4, then again near Atlanta Monday as a Cat 2.  As of 11pm Thursday, it was predicted we’d have 100 mph winds, which is a repeat of Hurricane Matthew last year.  Very do-able.

I like to stay informed yet not get caught up in news hype. I admit I had 2 days of anxiety when I first heard about the storm. Then I did my research. I saw that even if it passed over us as a Cat 4 or 5, it wouldn’t be total devastation. Now it’s veering east so we won’t get the worst of it. When I know what’s possible — weathering a big storm no matter how much the news hypes it up for their advertisers — then I can hold the vision of the best possible outcome. When someone points out to me an optimistic truth I may have overlooked, a truth that gives me peace of mind, that allows me to relax into a mental state where I am more open to guidance. As soon as I open to guidance and connect to Source, I get all the feedback I need to make my next step.

RELATED: After what Hurricane Irma did to the Caribbean, we’ll be fine
Andrea’s experiences with hurricanes and tropical storms
Here’s what the world’s most accurate weather model predicts for Irma
Mandatory evacuation, surviving Hurricane Frances, being the Vision Keeper
Be a vision keeper during the hurricanes
The phases of the moon drive hurricane behavior
Don’t add to the fear about hurricanes
Mild winter = mild hurricane season
Remember an active hurricane season doesn’t mean any will make landfall
I emailed news stations about a no cost plan for viewers to help with the hurricanes; global coherence
My Facebook posts for the Hurricane Matthew timeline