Just as I admit to being a soup freak, I also admit that I love all kinds of salads.  That wasn’t always the case.  It wasn’t until I switched to a lowfat diet in 2004 that I cultivated my taste for fresh produce and healthy dressings.  I have learned a few important things:

1.  I rinse everything.  I squirt it with some veggie wash spray, then rinse it in my reverse osmosis water.

2.  I must eat some oil or fat with my salads and vegetables because some of the vitamins are oil soluble.  That means if I eat  a nonfat or lowfat salad dressing, I will not be getting enough oil from it to activate the vitamins to fuel my body.

3.  The more pure, natural foods I eat, and the less processed foods I eat (processed = anything with a label), the more attuned my palate becomes to subtle taste differences.

4.  Having to cook my own food and chop my own salads is a good dietary move, since it increases my prep time and lessens my ingesting time *smile*

Here are some of my favorite salads.

A SIMPLE LETTUCE, TOMATO AND BASIL SALAD
First, the most simple is sometimes the best,  Fresh romaine, chopped fresh tomato right off the vine, some slivers of red onion, about 20 fresh basil leaves, a teaspoon of olive oil, a squeeze of lemon, sea salt and coarse ground pepper.

HOT POTATO, ONION AND ROMAINE SALAD
Last week I made this really good salad.  I didn’t want to have any meat, but I wanted substance, since the salad would be my entire dinner.  So I opened a package of chopped romaine and rinsed it and chopped it even further, then I added some sliced red onion and chopped black olives, tomato and capers.

Then I chopped a giant Golden Yukon potato and cooked it in a nonstick frypan until the pieces were almost crisp.  Halfway through, I added a bunch of drained, cooked garbanzo beans and kept tossing them all together.

At the same time, I sauteed a sliced onion in another pan until it carmelized and that went on top of the potatoes.  If you cook the onion with the potato, the potato will steam instead of sautee, and I wanted to trick myself into thinking the potato pieces were meat, so I kept them crisp.

Then just dump the potatoes on top of the salad, then the onions on top of the potatoes, then mix with your favorite dressing.  I’ve learned to like simple dressings of olive oil and vinegar or fresh lemon, and I always top with fresh basil and dried oregano.

AN AWESOME ALBACORE TUNA SALAD
This week I made a really good tuna salad.  I added chopped onions, radishes, celery, carrot sticks.  I first put in a glass bowl 2 tsp rice wine vinegar and threw in some raisins and craisins to hydrate in it.  Then the chopped veggies, then some albacore tuna and then 2-3 giant tablespoons of lowfat mayo, some pepper, garlic powder and tarragon.

I first put in a glass bowl 2 tsp wine vinegar and threw in some raisins and craisins to hydrate in it.

Then the veggies and then 2-3 giant tablespoons of lowfat mayo or Veganaise, some pepper, garlic powder and tarragon. 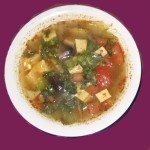 I’ve learned that it’s easy to keep some exotic ingredients on hand for the Asian soups I love, since most of the oriental markets carry them in the freezer section. Here’s what I typically have on hand that I buy at the Asian market:

Stalks of lemon grass. They will be in the freezer and will be wrapped like scallions. They give high lemon flavor as a soup or tea base, and you remove them before eating. I also grow lemongrass in my yard.

Kaffir lime leaves. These will be in the freezer maybe 25-50 to a bag. They give high lemon flavor as a soup or tea base, and you remove them before eating.

Gangalal. This is a form of ginger. It will be in the freezer in a small tray, probably already cut into small pieces. They give sharp ginger flavor as a soup or tea base, and you remove them before eating.

Chilies or chili peppers. These will be in the freezer in small bags. Most of them are too hot for me; you have to find your own comfort level. I sometimes pop a whole chili in a soup and then take it out and discard it. I do not cut it open. That gives enough heat for me. Remember the high heat is in the seeds, so after handling them wash your hands.

Fish sauce also called nuoc mam. I use the 3 Crabs brand. A little goes a long way. High flavor, smells hmm fishy; tastes great in a sauce or soup base.

Chili garlic sauce in a jar on the shelf. It is hotter than Sriracha sauce.  They are both red.

Sriracha hot sauce has a red rooster on the bottle. It is milder than chili garlic sauce.

Sesame Oil. Usually not cooked, but added into hot soups and dressings.

Bunches of fresh basil or cilantro for rinsing before last minute adding to soups. I also grow my own fresh basil.

Scallions in refrigerator for rinsing before last minute adding to soups.

My food blog: Goddess Grub, Luscious Lowfat Meals for the Goddess on the Go 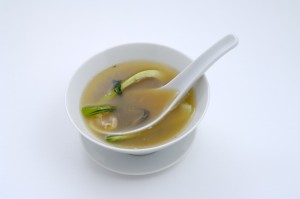 I heat 2 cups of vegetable broth in a saucepan. You can also use chicken broth or hot water into which a tablespoon of white barley miso paste has been mixed.

Grate in 3 tablespoons of fresh ginger

Squeeze in half a lemon

Rinse then chop a few scallions up and throw them in.

If it’s too lemony, you can add a little honey or even 1/2 tsp sugar.

Also good is a 1/2 tsp of Vietnamese chili garlic sauce for a kick. 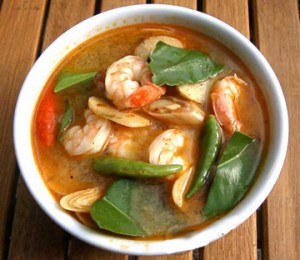 Andrea’s Low Fat Seafood Chowder:
Marinate 1 lb of bay scallops in the juice of 2 lemons while you begin.

Stir until the vegetables soften and reduce, then add:
1 giant can chopped tomatoes
1 small can double strength Campbell’s beef broth + 1 can water
handful of bay scallops for flavor
Simmer 45 minutes, then add the rest of the scallops.

It’s ready when they are done, 5-8 minutes, but I add them and cook another 30 minutes so they kinda melt into the stock.

I’ve also poached fish filets on top of the broth, for more protein and a heartier meal.

If you liked this, visit my food blog –> Goddess Grub, Healthy and Luscious Low Fat Meals for the Goddess on the Go 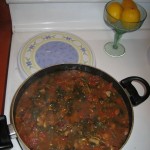 This is my favorite First Of The Fall soup, brought on by the first cold snap of the season.

I’m not someone who spends a lot of time in the kitchen. Maybe because I worked from home for so long that I got in the habit of eating most of my meals out. I have a handful of favorite dishes I cook for myself and for friends and one of my favorite things to cook is soup.  Sometimes I’m just looking in the fridge at the leftovers. Sometimes I do this in a structured manner, like deciding on split pea soup and buying just those ingredients, but most often I find myself in the store looking at a juicy stalk of fennel next to a fat leek and the ideas start to flow. If I have no direction in mind, I can just let the fresh vegetables of the day direct me.

END_OF_DOCUMENT_TOKEN_TO_BE_REPLACED

Hello and welcome to the April 2007 edition of Horizons Magazine. I feel like I live in a Disney movie. I walk outside each morning to put out birdseed for the cardinals, jays, woodpeckers, etc. and I watch squirrels chase each other across the long oak branches. I water a few plants, twist some vines in a new direction, munch a fresh basil leaf and rub fresh rosemary in my hair. I watch the baby lizards scampering about, and rake the leaves into a pile for the cats to jump into. Lately I’ve been raking leaves like crazy! The cold snaps back and forth the past two months have tricked the trees into thinking it’s autumn, so they’ve all been shedding their leaves. Even my bamboo took a rest from its breakneck speed growth and literally covered the ground beneath it in inches of feather-downy leaves. I love that the cooler weather this late in the season lets us know we will once again have a mild storm season.  END_OF_DOCUMENT_TOKEN_TO_BE_REPLACED