I will govern my life and thoughts as if the whole world were to see the one and read the other.  — Lucius Annaeus Seneca

Deja vu all over again! What would turn out to be a blessed weekend began auspiciously.  I’d just dropped off the June Horizons Magazine to Community Center For Healing Arts in Melbourne about noon. A half block away is the City of Melbourne’s Overlook Park, where I married two friends of mine back in the 90’s.  As I glanced from Riverview Drive, I saw two people in the gazebo. Usually I’d not pull in, I’d give them privacy, but I felt compelled to park and walk right up.  There were Patti and Don, the couple I’d married in that spot, 21 years ago that day, having their anniversary lunch. Since I’d lost weight and let my hair grow since they’d seen me last, and is HAS been years, as I walked up, I said “Hi, it’s Andrea, how are you guys doing?”  They looked at each other and laughed. “We were just talking about you,” he said.  We spent a few minutes catching up and then I left them to their celebration.  It was a fun beginning to what would turn out to be a weekend of magical synchronicities, at play with the cosmic forces of the Universe.  I can think of no better playmate.

Meditate upon the meaning this card might have for you since it showed up for you at this exact moment.
MEANING: The reversed 8 of Cups often means that you may be thinking about leaving a situation that seems as if it is no longer working. Receiving the card in reverse, however, points to a need to stop and think about it a bit longer. You may not have given the situation enough time yet. It’s important to keep reminding yourself that good times lie ahead for you. If your “gut” is telling you that you really need to get out of a relationship, job, or living arrangement, trust yourself..but think long and hard, first. Look before you leap and weigh all the pros and cons, if at all possible. END_OF_DOCUMENT_TOKEN_TO_BE_REPLACED

Six hours after typing my post at  The Perfect Time to Place the Craigslist Ad For Best Response, I found the perfect new tenants for the rental home.  A perfect example of deciding ahead of time what I want, prepaving it, using creative visualization to amp up my attraction vibe, and then getting happy enough for long enough to let it in.   If I can do it, you can do it. Check out these Creative Visualization Links.

A friend wanted to do some real soul searching on her own and I sent her to this free site of mine Sisters Of The Circle, a free online inner retreat site. How can I best discover what I am here for and what work might be mine to do?  How do our lives  – yours and mine – twine together, how do we fit into each other’s purpose and mission, if we do? I’ve discovered a lot of tips and tricks along the way, many gleaned from insights received during my own personal spiritual development retreats. END_OF_DOCUMENT_TOKEN_TO_BE_REPLACED

It feels like a holiday weekend.  Most holidays are busy days for my work.  For the most part, my work is not one I need to have a vacation from. A holiday to me simply means I get a day off from making a bank and post office run. I began Saturday filled with the full moon energy, fertile and nurturing, buying tomato cages and repotting everything with potting soil. As I watered, I began pulling grass and weeds that had encroached into the mulched bedding areas.  Some weeds I keep, such as the important Spanish Needle.  The bees love them, and they have medicinal qualities.   I pulled up all of the garden bricks I’d edged the new saplings with last year, and used them to line a walkway.   END_OF_DOCUMENT_TOKEN_TO_BE_REPLACED

I wasn’t going to place my Craigslist ad for the rental home until next week. Then I thought, why should I deny everyone who’ll be off for the weekend with time to look, when it’s those who think ahead that will be the vibrational match to my lovely offering. I got my current tenants through Craigslist and they’ve been heavenly tenants. Wait, I think they have.  I haven’t been there for months…  Anyway, Craigslist, let the games begin!
UPDATE: 24 hours later, the perfect new tenant 🙂

“Finish every day and be done with it. You have done what you could; some blunders and absurdities no doubt crept in; forget them as soon as you can. Tomorrow is a new day; you shall begin it serenely and with too high a spirit to be encumbered with your old nonsense.” Ralph Waldo Emerson

Tomato cages was my first thought this morning when I awoke, full of last night’s full moon energy. I’ve been putting in the hanging herb and veggie garden and realized the tomatoes were growing too quickly to keep in the hanging baskets.  I began the day with a run to Walmart for tomato cages then came back and repotted my 2 tomato plants in gallon buckets with the cages.  In this pic, the tomatoes are on either side, and the hanging coconut husk baskets are filled with thai basil, bee balm, peppermint and peppers, suspended on a length of bamboo between two shepherd’s hooks. You can see my line of loquat saplings behind, and my rosemary bush. My back is to the street, this is my only sunny spot for veggies!  This way, as the sun moves, I can keep the tomatoes in as much full sun as they need.  Most of my yard is under deep shade, which I love. That lets me keep windows open much of the year.  Life is good. 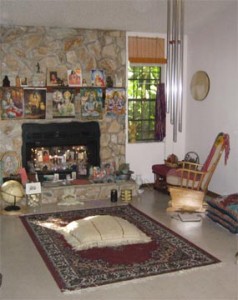 I’m often asked to pray for friends and have a healing bench here where I do that daily.  It’s important to remember that modern medicine is amazing, especially in cancer treatment. Anything is possible. Miracle cures happen every day. Prayer works. The belief and expectation of everyone the patient knows can uplift them to a place of happiness and comfort. Holding thoughts or recalling them being well and active and laughing will go a long way in changing the current consciousness of those who think about their condition, for them and for others with it as well.  When the thoughtform changes, the situation changes. This is how we change a thoughtform. A few with focused intent in the direction of a positive outcome is more powerful than a million with scattered thoughts and no intention. We can each perform miracles as we uplift each other and remind ourselves who we really are and what is really possible.

A diagnosis is just a snapshot in time
When “thinking positive” doesn’t help
Get diagnosed or not?
Why Do Spiritual People Ever Get Sick?
Doing Experimental Creat-ive Visualizations
Do you really have this or that diagnosis? Keep talking about it and you will.