Michael Everly and I attended Dennis Hollin’s table tipping séance Saturday night. He and I did talk about orbs a few days ago and I told him I’d try to get some in pics.  I told him how the more people who are focused on orbs at the time of the pic, the more appear, and the more you think about them the more you attract them.  I gave him a creative visualization exercise to do in the few days before last night’s session, to help attract them.  He said he’d forgotten about the orbs once the table got into action, the table amazed him, he’s never seen anything like it.  I’ve only so far been thru the 50 pics from my Sony Mavrika camera but I got several orbs right around Michael as he asked his questions, and one right at his lips.   I have 219 pics from my Canon Powershot to go thru yet.  I used my Sony Mavrika camera while my battery was recharging for the Canon.  It’s my favorite camera for orb pics, but it’s heavy and bulky and records onto 3″ diskettes.  I only had 5 diskettes with me.  But I was using the Sony near the end of the session, when I thought I’d get more orbs.  Let’s see what the Canon picked up.

May 23, 2017 If you got to this page by Googling Dennis’ name over a stupid tipsy post he made on Facebook, yes that was stupid but he’s apologized, admits it was completely inapproriate and that he never should have said it.  I’ve known Dennis 20 years. He can blurt out some dumb stuff, but he never means anyone harm.  If you’re drinking at midnight with a crude crowd, it’s easy to get caught up in their lingo.

I went to Lois Fredick’s yesterday to pick up my taxes and got some good surprises. She made me an LLC and said my taxes should be half next year. Had I been an LLC for tax year 2007, I would have saved $5,000. That’s good to know. I am surprised at how little sending the IRS $10k bothers me but am also real delighted it doesn’t. Kind of like when mom’s body passed I wasn’t sad and didn’t miss her because now she feels closer than ever and part of me. I like getting used to the big numbers in income. I like not knowing just when and how spirit is going to gift me with opportunity and abundance. I like meeting with new people, that shakes my shakti up and makes my mind open to new thoughts. When I’m open to new thoughts, I get new ideas and inspirations for fun and income producing projects. I don’t need to search out income, I just need to get in the flow and income will find me. 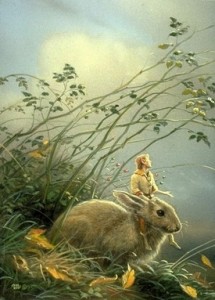 Folk stories of the Easter Rabbit began in pre-Christian fertility lore.  Some early pagans celebrated the return of Spring with a festival in tribute to their Goddess of  fertility and springtime, Eastre or Ostara.  The Goddess Eastre, was sometimes represented with a woman’s body and a rabbit’s head. One popular legend says Eastre found a bird, wounded, on the ground late in winter. To save its life, she transformed it into a hare. But “the transformation was not a complete one. The bird took the appearance of a hare but retained the ability to lay eggs… the hare would decorate these eggs and leave them as gifts to Eastre.”  Enter the Easter Bunny.   The egg is a symbol of fertility and rebirth, of new life. It stands for the renewing power of nature. The egg can also symbolize regeneration in a spiritual or psychological sense. END_OF_DOCUMENT_TOKEN_TO_BE_REPLACED

Fran Jenkins came over last night and we sat out at the firepit. It was a nice visit.   After she left, I went to bed about 11pm and stayed there until almost 7am. I had several dreams that she was in and I will have to meditate upon the meanings. She was at a desk and I got the impression she was at the checkbook getting ready to write a check, however her arms were bound to the table. As she tried to move her arms, promissory notes kept piling up underneath them, like she’d get her hand moved off the table about 3” and 3” worth of prom notes would appear under them. The arms bound at the checkbook is my typical dream for someone who has some karmic debts to be repaid before income can start flowing.   END_OF_DOCUMENT_TOKEN_TO_BE_REPLACED

I wrote a friend who had asked for some advice on how to begin his profession as a psychic and to attend the expos, etc. He emailed me: “Wow. I hope this is a chapter in your wonderfully successful book, HORIZONS, CONFESSIONS OF AN OPTIMISTIC PSYCHIC. You know, the one that begins, “Be of good cheer. When a psychic is also an optimist, the future is bright. Who knows which comes first, the perception or the so-called reality? All I can tell you is that I’ve been there, and things are looking terrific.”   END_OF_DOCUMENT_TOKEN_TO_BE_REPLACED

I’ve lost my voice again and had to reschedule a week’s worth of readings. It seldom hurts me when I lose it, but I’ve learned that it is because my voice is gone that I know my vocal cords can be hurt if I don’t let them rest and heal by me not talking. Like if I had a blister on the palm of my hand yet I would clap them in applause several times every hour or so.  It would just take longer to heal.  When I began chanting and doing mantra and giving meditation instruction, and later for hypnosis, my voice became my own version of vibrational sound healing.  I’ve trained it to induce altered consciousness.  I didn’t set out to do that, I just fell into knowing how to do it and it helps with the work.  In the past I have read for audiobooks, but that is hard work, I prefer doing industry and corporate training recordings, I have done commercial voiceover, I like being behind the scenes 🙂

A friend wanted some initial info on how to produce their own psychic fair. I emailed him:

Where would the readers be placed?
How many in each room?
Do they bring their own table and chairs?
How much to charge for table space?

First of all, a venue with walk in traffic is crucial. We used to do them at the Cocoa Beach Hilton during a holiday weekend, Labor Day or Memorial Day.

What works best at a fair is usually short readings, say $20 for 14 minutes.    END_OF_DOCUMENT_TOKEN_TO_BE_REPLACED

I have zero time to do expos, it is all I can do to keep up with the magazine and the readings each month.  I am getting calls in response to my production internship ad, so hopefully I will assemble a helpful team.  Since they are unpaid positions, we’ll see 🙂  Most people want to work for Horizons because they really just want to hang around me *hehe* because they think I am fun all the time.  So we go thru the charade of training and when they don’t get enough personal attention from me anymore, they lose interest and I have gotten behind in work again by training someone.  It’s easier to do it myself for the most part. I don’t mind doing extra work since I love working alone – small price to pay.  I’m lots faster (at what I know) than anyone else also, so I will learn to come to a balance. Anyone who actually shows an interest in the work and an ability to help will get added to the payroll pretty quickly.

A friend emailed me: “ I was just asleep and felt a hand on my foot. Freaked me out then I thought how funny  and trIed to talk to whatever was here.”   I replied: “That’s what I’d do, ask what they want.  I never ask who they are because you can’t trust what they say (“Oh, I’m Archangel Michael!”, “I’m Master Kwan Yin!” I’m Blessed Mother!”).  I ask what are they trying to tell me.  Always remember also any questions you may be asking of life and then in every moment when you feel there is a sign, see what that sign might be answering for you.  So it is good to stay focused and always have a few questions out there, and then watch for signs of being answered.

I just reconnected with Andrew Wilson after almost a decade, he is the son of a former very favorite boyfriend. Andrew was on Channel 15 last night talking about doing Spartacus with the Space Coast Ballet. I called him afterward to tell him how good he was on screen. So then I dreamed about him.  In the dream Andrew and I were hanging out and he was going to move in like a roommate, except we were flirting with each other too. Then somehow we are in some other place that I take to be an apartment I (we?) are thinking of moving into, except right now it needs painting plus there are other people who have set up house there temporarily. I have a sheet or blanket wrapped around me and walk into ‘my/our room’ because I feel I’ve been woken up and just want to go back to sleep. Andrew is going back and forth into a back room full of equipment, a room I didn’t know or had forgotten the apartment/house had.  I get the impression the people there are doing something illegal and if Andrew isn’t doing it too, he at least knows something about it. (in real life, Andrew is a straight arrow.) I go to sleep and he goes to work or something. Then I notice someone else is also in the bed under the covers sleeping and it kind of creeps me out because I didn’t notice him before, so I get up and wander around the place a little. I am looking for a big tshirt or something to wear because I am wrapped up in this sheet and having to hold it up and keep it from dragging. It turns into a dream of me trying to make it home, having to walk facing backwards at times because I can move faster that way. I take the “moving backwards” to mean sometimes to get to where you want to go you need to put your back into it.