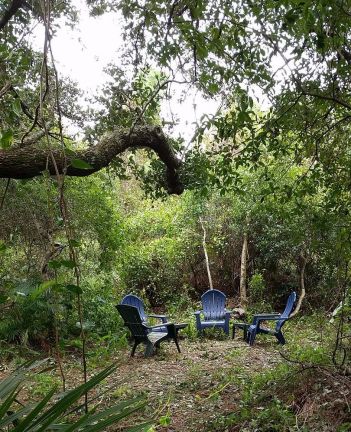 Finally the temps have dropped and it’s cooler in the early mornings. Something about the crisp cool air makes me want to get moving and be outside in it. I used to spend a lot more time in my yard, walking the trails, sitting at the firepit. Then I let myself get derailed for a few years when a troubled friend began showing up uninvited. A former neighbor, he knew my habit of meandering in my woods at all hours. He doesn’t recognize boundaries, so he’d walk right in. Then he moved a mile away and I’d see him walking Emerson Road 3 blocks over, looking wasted. Each time, I’d stay inside for a few days after, just in case. It became habit to stop hanging in the yard, not knowing when he’d show up or was even there, unseen. Whenever I went outside I’d wonder if he was lurking like the old days. I got used to living back inside the house and missed the joy of being outside at all hours. A self imposed exile since I couldn’t get it out of my thoughts.

I GET TO BREATHE A SIGH OF RELIEF
Last week I breathed a deep sigh of relief. I learned my former friend was in custody again. A neighbor’s son, I’d helped him 7 years ago when he did 6 months in SC for stalking and indecent exposure. We later had a falling out and he was asked to stay away. A couple of years later he was arrested again for grabbing a woman in the local dollar Store. Last month a family member reported him missing. This alerted the authorities that he was on the sex offender list and that he’d missed a deadline for registration. Sex offenders must register a change of address within 48 hours. He moved months ago and never changed his address. I helped him after his last incarceration and stressed that if he does nothing else in his life, he has to stay registered or he’ll go back to prison, that his main job for the rest of his life is to stay legal. He had other priorities.

FOR PEACE OF MIND, YOU HAVE TO BE RESPONSIBLE.
How can I say I’m 100% responsible for what I attract into my life? Because I am 100% responsible for the thoughts I choose to continue to focus upon, and continuing a line of thought is what leads me to choices which determine my life experiences.

No one should have to live in fear in their own home. But I was the one making it a prison by the thoughts I chose to think and the fears I allowed to surface and gave attention to. I wasn’t aware I still held so much tension in my mind and body about it. When I learned he’d been picked up and was being held without bond, I felt a giant energy whoosh relaxing me. Then I took a 12 hour nap and I woke up with more energy than I’ve had in a long time. I immediately went outside into the cool air and wandered the property in the dark for a long while, celebrating my newfound freedom.

SOME FOLKS THRIVE IN A STRUCTURED SETTING
The good news for him is that he functions well in a structured setting and he’s healthier with regular meals and sleep. He wrote me when he was incarcerated 6 years ago, sharing insights for 6 months what he was learning about himself through the process. A former born again Christian, he can be deeply insightful. When he’d call, we’d talk about the soul lessons he was learning from his life experiences. He can be charming and uses humor to get along, so he had no problems 6 months in a SC jail.

HELP FRIENDS REFRAME THEIR TROUBLES
Even if it’s all just a made up fantasy to impress whomever he’s talking to – as I later learned — he has the capacity for vision and that is amplified when he’s in a structured setting. I told him last time that the best thing he can do when people talk about their woes is to help them reframe what happened to see it in a different light. A light that helps them learn something about themselves, offers a course correction and gives them hope for a future. Never deny someone hope, it may be all they have.

WE ALL NEED TO FEEL A SENSE OF PURPOSE
When he began seeing himself in a teacher/mentor role while in custody last time, that gave him a purpose, Helping others gave him a mission and hope for the future. So I’m sure he’ll revert back to that. He’s a chameleon.

NEW LEVEL, NEW DEVIL
Every time your world changes and you reach a new level, it presents you with new “devils” to contend with. But whenever you’re presented with new challenges, you are also presented with guidance to overcome them. So consider that whenever you’re observing what you think is a “devil,” is simply an angel taking you to a new level.

YOU DON’T WANT JUSTICE, YOU WANT MERCY
Don’t be screaming for justice, when what you really want is mercy. Go ahead and play the system if you think you can get away with it but be prepared for the karmic consequences. You know deep in your own soul the truth of the matter.

It’s been an eye opening month. I feel freer than I have in a long time. A good lesson in not letting people or circumstances keep me down, that I can be happy no matter what. Life is good.

UPDATE: 4-12-19 He went to trial last week, there was a downward departure to the sentencing guidelines so they could withhold adjudication and not have a felony conviction. Dr. Jekyll took a plea deal so Mr. Hyde will be out by summer

RELATED: Helping a friend in their unfolding while incarcerated
RELATED: I got an email: Are you still not speaking to me?
RELATED: A former friend got arrested for grabbing a woman’s crotch