A former friend was arrested locally for grabbing a woman’s crotch. He got himself on the Sex Offender Registry in 2012 following conviction in a Florence, SC indecent exposure case.  In September he showed up at my door when he’s been told to stay away. December 22, 2016 he  was picked up for violation of his pre-trial release order.  He’s fond of saying any publicity is good publicity and he can charm his way out of anything. Sure you can, my friend, but holding a mask up is a full time job and sooner or later it’s going to exhaust you. Aren’t you tired yet? A troubled individual, maybe now he’ll get the help he needs. Here’s the article Palm Bay Man Arrested For Grabbing Woman’s Crotch . 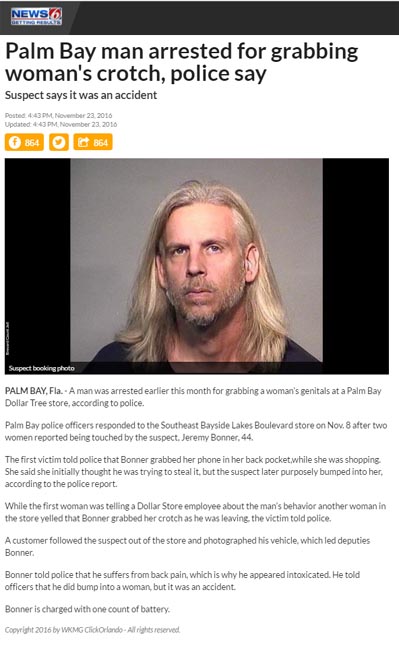 RELATED: Update on former friend arrested for grabbing a womans crotch — in custody

RELATED: I breathe a sigh of relief, he’s in custody again