Last month on The Larry King Show, he had a panel including author Marianne Williamson, an evangelical pastor, a Catholic priest, an atheist, a Jewish Rabbi and a Muslim on “What Happens When We Die?” During the talk, the evangelical pastor and the atheist both stated there was no evidence to the claim of the other. We hear that a lot in debates and sales. Statements are made as if it’s The Truth rather than just the belief and current understanding of the speaker. Or, in the case of sales presentations and news reporting, it may not be the speaker’s personal belief, but it is what they are paid to tell you is the truth in order to get you to buy their product or story. The pastor was adamant that the Bible is the ultimate, final and unchanging Word of God and that it contains all the proof anyone needs. The atheist stated “There’s never been secular evidence that Jesus Christ ever existed.” The atheist chose to not accept the Bible as evidence. The pastor chose not to accept her statement that there was no secular evidence.   END_OF_DOCUMENT_TOKEN_TO_BE_REPLACED 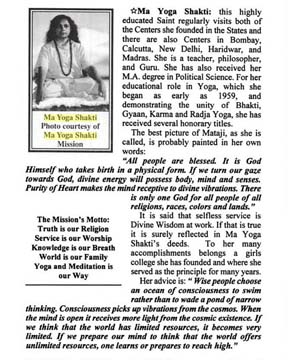 “All people are blessed.  It is God Himself who takes birth in a physical form.  If we turn our gaze towards God, divine energy will possess body, mind and senses.  Purity of Heart makes the mind receptive to divine vibrations.  Wise people choose an ocean of consciousness to swim rather than to wade a pond of narrow thinking.  Consciousness picks up vibrations from the cosmos. When the mind is open, it receives more light from the cosmic existence.  If we think that the world has limited resources, it becomes very limited.  If we prepare our mind to think that the world offers unlimited resources, one learns and prepares to reach high.”  Ma Yoga Shakti

From Page 92 of Awareness – the Center of Being: A Complete Guide to Self-Awareness with Proof for the Existence of God by Karl W. Benzing