My hands are feeling 100% better! Two days ago I made the decision to dedicate all afternoon to soothing my sore strained paws with massage, pranic healing, bongers, visualization and music therapy. I found I can listen to my favorite piano concertos and feel it moving through my nervous system like an elixir and healing my paws as it flows out my fingers. I’ve been using the headphones while sitting in front of the altar space, hands resting atop my knees. I envision myself inhaling the music in through my fingertips and exhaling the pain out my mouth. I knew it was just blocked energy, something I was holding onto that I was not yet aware of. I over strained my hands/arms by over-use and over-scrolling. That’s why I scheduled the emergency appointment to spend yesterday alone at the beach and figure out what I needed to “let go” of, what I needed to “release my grip” on. I realized I needed to get the energy moving and figure out what I was metaphorically “keeping a grip on” that I needed to let go of. Yesterday I spent several hours at the beach, letting myself be drawn into the Now, which is where my power lies. Once there, I realized there are a few things I need to drop my involvement in. Once I made that decision, I felt very free. 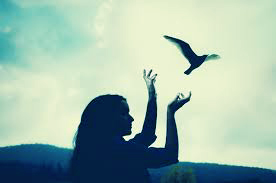 And my hands were no longer throbbing. It’s nice to have a relief from that. The discomfort had made me restless and bitchy. Just the acts of brushing hair and teeth, getting dressed, opening and closing doors, seat belt, steering wheel, the paws got exhausted and throbbing within minutes of getting up. Then I’d get restless and snippy. On the upside, I lost 2 pounds without trying! Mealtime has been a trip the past couple of weeks left handed. It’s been easier to pick meals up or heat a Lean Cuisine rather than prep, cook, clean. Two pounds down, It looks like that paid off. Giving both hands a rest at the same time is a real trip, though. I’ve been using the time for yoga, meditation, visualization, oh and binge watching The Girls on HBO. A gal’s gotta do that a gal’s gotta do.