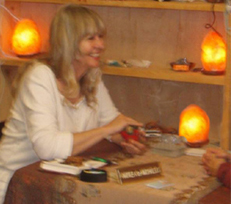 I did a reading last night for a new celebrity type client, who said she saw my name in the acknowledgement/gratitudes section of Doreen Virtue’s book Divine Guidance: How to Have a Dialogue with God and Your Guardian Angels.  She Googled my name and had been reading at the Horizons Magazine website for the seven months while she waited for her appointment.  I used to get really excited when I began getting clients who were known by the public.  Of course that’s a two edged sword, because you have to keep it confidential.  But they do turn you on to an entirely new clientele.

I do most of my readings between 9:00pm and 3:00am.   Most people want a reading after they have their family in bed and they have time to themselves.   The ones on the west coast are three hours earlier, so midnight here is just 9:00pm there.  Of course everyone wants predictions about future events and some want to connect with a deceased loved one, but my favorite part of the reading is always letting them know that they can do what I can do.  They can learn to discipline their mind, and use creative visualization to demonstrate the law of attraction in their lives.  Can I give them tips on what to do to make their career go well?  Sure.  Can I give them accurate predictions and observations?  Sure.  But more and more I am seeing that they, too, are excited to learn to meditate and visualize and attract for themselves.

I worked for the Psychic Friends Network from 1992 to 1996 and would sometimes do 40 to 60 readings a day, week in, week out.  Many were just 4-6 minute readings.  Some wanted the maximum – the entire 30 minutes.  Very few of these callers would be interested in learning to meditate, they were always more interested in “who’s my baby’s daddy?” and “am I going to have any money coming in?”  There were the occasional really interesting clients who wanted to know what books to read to learn to meditate or visualize, and I would turn them all on to Shakti Gawain and Abraham-Hicks.

Since 1996 when I left Psychic Friends Network, I acquired my own private practice of clients and I’m able to book up to a year in advance. So is it more fun to read for celebrity clients than just average Joe and Jane I grew up with?  Well sure, but only in that I don’t know them yet, and there’s a certain titillation factor in seeing someone in the public eye that I know secrets about 🙂

So are the problems they call to discuss in the reading real different?  Nope, they’re not.  They are wondering about their job security, their love life, is he ‘the one?“, when will they have a baby, will they be moving soon, will they receive a nomination or award or acknowledgement or…   it taught me that no matter what the lifestyle, the problems are the same.  Sometimes I am surprised at what they openly reveal to me, not knowing me.  People don’t always tell me who referred them to me.  I like that.  It lets me have zero expectation.

Right now I have a situation where two clients are seeing the same man and he has made the mistake of giving each the same story to extract money from them, and even writing each the same poetic emails.   It was when I saw the emails that I knew it was the same man using the same poem.  One client lost $10,000 to this man, the other far less, but only because Providence intervened and brought her check back.  We considered it a great boon that she got off that easily…  except, of course, for a broken heart.

“How did I attract that?” she asked.  “Why do I keep attracting jerks?” She knows about the law of attraction.  But when we got right down to it, well, he had many qualities that she really loves in a man.  In fact, all he was lacking was integrity and independence.  She wanted someone who would speak sweetly to her and tell her how wonderful she was and encourage her in her dreams.  He was doing that.  He would tell her big stories of their future plans, and she liked the secure feeling of that.  So far, her attraction process was working just fine.

Then shortly after meeting, he told her about a temporary financial crisis he found himself in, and asked for a loan.  She thought it odd that he, a successful businessman, had to ask her for a loan rather than any of his business associates or his own bank, and even odder that he wanted it sent Western Union.    So she agreed, even though it didn’t feel right.  When she asked him to sign a promissory note, he got all up in arms about it.  Suddenly it seemed the honeymoon was over.

What did she do wrong? I don’t think she did anything wrong, other than allow herself to get sidetracked onto a topic that doesn’t feel good, such as loaning money, and let it downward spiral from there.  What can she do to remedy it?  She can spend some time visualizing what a better relationship might be and begin to attract that for herself.

So, do celebrities have the same questions and worries and insecurities the rest of us have?  Oh, yes.  Just on a grander scale.

No matter who were are or what we do, we can each use the power of our own thoughts and words to attract to us the better tomorrow we’re ready to live.