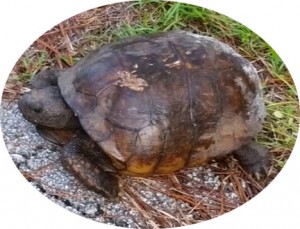 There’s a new tortoise in the ‘hood!

On our way out for the day’s adventure as we pulled out of the driveway we see a new gopher tortoise. Neither of us have seen him in the neighborhood before. I took his photo and moved him across the road where he was headed. I posted his pic on Facebook and asked, “What do you think his name is?” Horizons Magazine Astrologer Barbara Lee suggested “Murphy.” I told her “It’s interesting you say Murphy because I just today discovered that both the man and I have a connection to property with the name Murphy in it.“ Murphy it is.

As an animal medicine totem or spirit animal, Tortoise lives its life in a slow and steady manner, eats simply and has very few real predators. They don’t react crazily or on impulse. The tortoise seems to give off a sense that they think about what they do before they do it. It’s like they’re pacing their lives on purpose, making them a great symbol for order and pacing yourself. All over the world, the tortoise is seen as a symbol for wisdom, security, endurance, peacefulness, longevity, and patience.   So we took her advice and paced ourselves, and had a fun relaxing day.  A warning though, years ago a friend found a small turtle in her yard and thought it’d make a great pet for the kids.  He’d crawl around all over the house and the kids would put him in their bed and hold him on their lap.  The younger child got very sick and they traced salmonella back to the turtle. Turtles are known to carry salmonella and transmit it to humans via handling them and walking barefoot on the carpet and floor they walk on, and they do poorly in captivity due to stress, dehydration, and internal parasite issues.