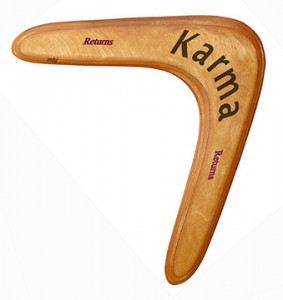 Life is a boomerang, you get what you give. Clear up the past and start giving good stuff, and see what comes your way.

Prayers for Domino who left a troubled marriage and whose wife is catching up to him now, threatening divorce and jail.  He’s in the angry, blameful stage, however that will pass when he stops fueling it with his thoughts and words.  So why is she showing up now when everything is going so well?  Because the Universe knows his greater intention to live a happy life. It will present every opportunity for him to have closure, to make peace with his past, to stop creating new karma over old situations by being truthful.  Each time the opportunity is presented and ignored, it just goes back to the end of the line to come around again.  We get endless opportunities.  But he won’t admit his part in problems.  He doesn’t see that no matter what he does or where he goes, since he’s left behind him a wake of lies and broken promises, he’s going to keep attracting the same into his own life.  We are the only ones holding ourselves back. There is always a way to make a peaceful and fair parting.  If you did not attract an amicable conclusion out of a person or situation, whether a marriage or a job, that was just an indicator of your vibrational resonance at the time.  Now that you have new knowledge and grok that powerful lesson, you are vibrating in a new place.  From this new place of understanding, you will attract a different result.

The more often during the day that you bring this to mind, the quicker the situation will begin to resolve itself; the quicker ALL of the knots in your life begin to untangle, since it’s all related.  I suggested he do the Hawaiian Forgivness Ho’oponopono Process, apologize in your mind, ask them to forgive you, express love.  I also suggested he do Harry Palmer’s Compassion Exercise “Just Like Me.”

“How do I know if it’s working?” he asked.  You’ll know when the situation begins to resolve itself.  You’ll know because the damage will have stopped echoing around you.  And if it doesn’t work?  Then you have  a little more emotional work to do on that person or situation.

My suggestion?  Do the inner and outer work to clear up the past, so it doesn’t taint your new beginning. It’s hard to tell friend from foe when we’re caught up in illusion and emotion.   Time will tell. And we have all the time in the world and not a moment to lose.