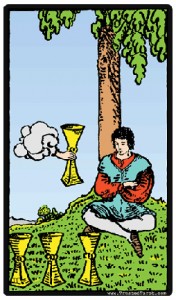 Four of Cups. Opportunity being offered. He doesn’t see it, nor the 3 previously offered

I finally listened to a friend’s video and understand what the problem is. I live in the same town he does but we live in two very different worlds because we each choose a different focus. He said he considers most spiritual practice to be the practice of denial and that he’s lost most of his former spiritual community because of that belief. But he misunderstands. He hasn’t “lost most of his former spiritual community” because he believes them to be “in denial of what’s really happening.” He’s lost them because all he does is angrily point out what there is to be afraid of and how things are always going wrong. He said it’s time for God to start supporting the people who want to do the right thing. If he looked for evidence of that, I think he’d be pleasantly surprised. But I’m getting ahead of myself. Here’s the back story.  The last several years he makes daily videos chronicling the ongoing conflict he encounters.  He’s lost his home and been ripped off by those professing to care. I gave him my input and suggestions years ago, but it wasn’t for him. You can’t tell anyone something they aren’t ready to hear. I wrote about it in Sept 2008 –> A dream with Dr. Mary and she’s got a message.

Telling someone something they are not ready to hear is like the 4 of cups tarot card. It shows opportunity being offered to him out of a cloud in the sky. He not only doesn’t see it, he cannot even see the 3 times it was previously offered. Cups stand for matters of the emotions. In the 4 of cups, he’s being offered the opportunity for emotional fulfillment yet he doesn’t see it. This describes my friend to a T.

He’s got himself in a dilemma since his Facebook and YouTube peeps are into controversy and conspiracy and their focus every day is ‘how is the government ripping us off now?” It’s hard to attract a better situation when you’re vibrating in the midst of something ongoing like that. I’ve briefly listened to snips of his videos thru the years but they are not for me, all railing against the government and debating conspiracy theories. But tonight his video was only 10 minutes so I listened. And it made me understand something.

He said he considers most spiritual practice to be the practice of denial and that he’s lost most of his former spiritual community because of that belief. He goes on to say that is why he cannot find a place to live, that so many of his friends do not even acknowledge to him that there is a problem, much less try to help him fix it.

He talks about people who say “accept what is” and that he will never accept “what is” because to him what is is a world run by criminals. He says those who do not believe as he does are living in never never land and in a dream world of illusion. He said it’s time for God to start supporting the people who want to do the right thing.

I understand that these things are said by someone who has been an activist for the 20+ years I’ve known him. During that time, he’s talked openly about his struggles and conflicts, and the causes he’s been passionate about. During the time I’ve known him, his focus is always about being critical of the status quo, and engaging with groups that discuss conspiracy theories. I’m not saying those things don’t happen, I’m saying that’s been his focus.

He hasn’t “lost most of his former spiritual community” because he believes them to be “in denial of what’s really happening,” he’s lost them because all he talks about is pointing out what there is to be afraid of and how things are always going wrong.  He may do it with a smile at times but there’s a simmering anger that is hard to be around for long. I am not in denial of anything happening that he says is happening –- government control and authorities lying to us. Sure it happens, that’s life. But it’s not my focus.

And I’m not in denial just because I choose to focus on what good there is going on in my life, or anywhere else in the world. Because the good so outweighs the bad. I don’t feel I’m living in a world run by criminals, however I live on the same planet my friend does. Why do we have two such different experiences? Because we each chose a different focus.

I go out of my way to find and focus on things that please me, things that uplift me, to find examples of people helping each other. We find what we seek. That makes me vibrate in resonance with finding more good things to be happy about.

He spends his time looking for evidence to support his notion that it’s a scary world where people take things from us. We find what we seek. That puts him in vibrational resonance with more scary stuff happening to him and it does.

I live on the same planet and in the same town but I live in a completely different world than he lives, and all because I choose to focus in a direction that pleases me. I look for things to make me feel good.

He said it’s time for God to start supporting the people who want to do the right thing. The thing is, that’s happening all over the world right now and has been all along. Just because there is a particular situation he’s attracted to himself that isn’t going as he’d like it to go, doesn’t mean that God wants him to fail. It’s just that he’s failed to see the blessing in so much of his past that it’s no wonder he can’t see what’s before him right now.