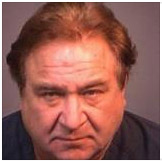 Al  was the attorney I worked for when (astrologially) I hit my Uranus opposition at age 40. Working at the Nick Tsamoutales law firm was a real motivator for conscious evolution and not only because they had the longest hours and lowest pay of any legal office in the area.  1992 was a pivotal time in my spiritual awakening when I was practicing tapas/austerities and putting myself through many disciplines and deprivations. I’d just left working for Judge Stanley Wolfman in Rockledge 30 miles north. I wasn’t yet ready to work full time for myself. Al’s office was close to home and he was fun in the interview. Al had a mixed legal practice and I had experience in everything he did and knew the software. The pay was half the going rate but I took the job as a “deprivation” to work through, to overcome my belief I had to make a certain amount of money each week. To see what spiritual lesson I might gain by my self imposed “poverty.” Al was a fun guy, he got along with everyone.  He had a few shady clients (which likely got him into his current mess) and I later went into business with one of them, Steve G. Smith. I left when Nick’s paralegal showed him my Yellow Pages ad for legal document preparation under the name Andrea’s Legal Ease.  I thought what I did on my own time was no one’s business but he saw it as a conflict and fired me.  As I was packing my desk, Steve approached me about doing collection work for local veterinarian offices he knew, so we went into business together. For a short time.  Steve acted dishonorably during our venture and I got a good lesson. But Al, Al was always a real cool guy. Today is his 4 year anniversary of being in custody. It looks like he got home for the holidays —> Brevard lawyer detained in Ecuador after skipping town before grand theft trial