The tenant simply needed prior approval for signage under the lease terms, which he didn’t apply for. But he got lots of attention, he sold lots of flags and everyone still gets to hate the landlord. Absolutely hilarious.

I noticed two days ago a local business owner was making his landlord a target for hate.  The Tenant Liberty Firearms sells firearms and flags and he put up on Landlord’s property several large black/blue flags with his business name that he  said were to support law enforcement. Tenant went to social media and the press, saying the Landlord asked that flags be removed. He said the Landlord doesn’t support law enforcement and that his constitutional rights were violated. Not knowing the lease terms nor the other side of the story, I didn’t speculate, but he got the local gun crowd all up in arms against the landlord for two days. Today the real story comes out — the problem was simply that the lease stated a protocol for presenting signage for approval and the tenant failed to do that. As soon as he did that, he got approval.  But he got to milk it in the media for days, give misleading info on video and sell lots of flags. Watching the comments unfold on the community Facebook pages gave me real insight into the mindset of neighbors ready to jump to conclusions, take one person’s story as true, gang up on the (perceived) opponent and incite action against the (in this case innocent) landlord.   They’d post inflammatory remarks and then delete them when challenged by the truth or the law. Sheesh, the extent someone will cast shade on another just to make a few bucks.

It’s interesting to see people get out of shape over something when they don’t know the real story, when they don’t understand the law and they miss the entire point. In this case, these are all gun fanatics hearing one of their own make an (unfounded) complaint and then going balls to the wall to crucify the target. It was a virtual lynch mob. Here’s what they didn’t consider:

1.  Landlords have lease clauses and policies to keep their property safe. If tenants want to promote their business, they can read in their lease what the guidelines are for doing it.  Case in point, this whole matter was simply a result of the tenant not following the lease requirement to have signage approved first. The landlord did NOT “fail to support law enforcement” and did NOT suppress nor violate the tenant’s constitutional rights.

2.  As a business owner and landlord, in volatile times — meaning specifically right now while it’s a hot topic — I wouldn’t want someone putting controversial signage on my property that might make it a target for those opposing that viewpoint. Some of the more volatile posters stated they’d called the landlord to complain, all the while not knowing the real issue.  The landlord never had an issue with law enforcement nor the flags. They simply needed the tenant to follow procedure for getting prior approval.

3. Here’s the biggie. considering most of them are firearm fanatics and social activists. They don’t know the law and they don’t understand the Constitution. Yes, the First Amendment lets them have their say but they can’t have it all over someone else’s property, and they can’t do it to incite actions that would harm others.  One friend commented “Try screaming BOMB in a crowd and you’ll see just how far that ‘free speech’ thing goes.”  I was kind of surprised he didn’t know it, but I told him “That’s specifically what the First Amendment does NOT protect = your free speech can’t be used to incite actions that would harm others.”

I really did not know why this was an issue other than to get publicity. It had nothing to do with the landlord “refusing to support law enforcement.” From what I can see, the tenant was doing a really good job of riling everyone up to hate the landlord and to invite who-knows-what onto his property. I would not want to be the landlord with this grumpy group literally gunning for him.

To sum up, everyone got all riled up over the mis-perception that the landlord was violating the tenant’s constitutional rights when in fact all that happened was the lease stated a protocol for presenting signage for approval and the tenant failed to do that. Oh, and the tenant got to sell flags and everyone still feels justified in hating the landlord. Hilarious. 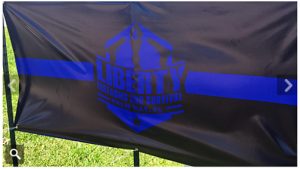 The comments even declined into remarks about the Black Lives Matter movement.  When I joined the FB group, the members at the page were helping folks out. Then I saw them attacking the ones who gave an opposing viewpoint. When it declined to racist remarks, bullying, baiting and name calling, I stopped reading.  I’m grateful for the local community Facebook pages that let me know what shameful, ignorant racists live around me. Bless all the hateful, mean-spirited ones who don’t realize it all comes back to them, I’m sure they have very difficult lives and I pray for them.  To those who live in a small world and don’t have much variety of life experience: heads up! Thugs come in ALL colors, shapes and sizes. I could tell by the profile pics of the posters. Don’t get it twisted.

UPDATE: 7-19-16  — Apparently I got kicked out of the group for not staying silent in the midst of the hateful and racist comments. The really hilarious part is that from the day after this post, the flags, which all contained his business name, were no longer up.

RELATED: Don’t believe the misinformation
You can find heaven in the midst of hell
You wonder how it happens?
Start being kind and see how your life improves
Break The Cycle: Racists only know what they were taught
When we hate, we give someone else the power
Benny didn’t grow up thinking Mouse Lives Matter
When we believe all lives matter, we’ll start acting like it
True Americans celebrate racial, cultural and religious diversity
Honoring the angels you find in front of you