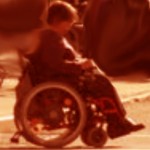 I woke up hungry this morning, with an appetite for the first time since my head cold began a week ago. My pal G was already eating breakfast, so I thought of asking Steven Hart to join me, since we’ve been trying to connect. His Facebook page didn’t show any activity, so I opted to go alone, not wanting to wake him with an early call. On the way to IHOP two miles away, I see a familiar figure, a somewhat scruffy looking gentleman in a wheelchair, heading east. I saw him last week in the parking lot at Publix near Wendy’s, eating under a tree next to the duck pond. Living near an I-95 exit, I see a lot of homeless in transit. I didn’t think more about it. I went inside and ordered breakfast: a spinach and mushroom omelette with no pancake batter, no cheese and no hollandaise sauce, dry rye toast. As I sat drinking my coffee, he came in and was seated at the table next to me. I got a good look at him. He appeared sun weathered, dirty and dusty from the road.

He asked the server for breakfast suggestions, telling her he didn’t eat pancakes or toast or fried potatoes. She suggested an omelet and I immediately thought, “if he’s sensitive to gluten, the omelet has pancake batter in it.” He opted for eggs with bacon and said Waffle House gives him a side of tomatoes. The young server seemed confused, so I called across and asked if she could simply substitute sliced tomatoes for his hash browns and toast. He said to her, “Yes, that’s what I want.”

He told her his hands were dirty from the wheelchair. I asked if she could bring him a wet cloth for his hands and he said, “Yes, please, thank you.” I didn’t feel I was butting in. He had a hard time getting the words out and the server was young and seemed like she didn’t know what he really wanted. 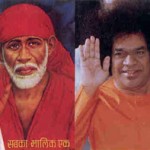 When the server walked away, he turned to face me and suddenly the dirty, scruffy guy in the wheelchair was replaced by the form of Satya Sai Baba (Swami)  who was smiling and laughing. The entire scene telescoped and it was just he and I. I feel a kundalini rush and was suddenly overcome with wanting to drop to his feet, knowing who He was. I mean, I was aware that I was having an internal vision as I was sitting in an IHOP, surrounded by people who had no idea what was happening. I also knew it didn’t matter if I dropped to my knees at his feet or not, He knew and I knew what was happening.  I was overcome with Joy at the private interchange between us. I knew it would go on as long as I held my gaze upon Him. I knew from experience that as soon as I glanced away, the Moment would be gone. And it was.

I went back to my coffee as he went back to his. A moment later I hear what sounds like a fork dropping to a tile floor. I look up and see he’s got his fork (and there is carpet beneath us, not 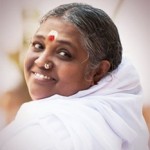 tile.) But now he’s turned into the form of Amma, Mata Amritanandamayi, The Hugging Saint.   Again, there is the telescoping of the entire scene into a pinpoint focus and it’s only Amma and I, and she is smiling and laughing. Again I am overcome with the urge to drop to my knees at Her feet and again I realize I am in the middle of the neighborhood IHOP and it would probably draw a lot of attention. The attention is irrevelant, I know this is all about ME and HIM/HER — God in whatever form.

I realize this is walking the razor’s edged path, living in both worlds at once. I knew it was irrelevant to Swami and to Amma whether I acknowledged Him/Her publicly. They knew what was in my heart. They knew that I knew that They knew. Again, I held the gaze as long as possible and then the Moment was once again gone.

I got up to leave and he half turned to the side and half looked up and again said Thank You. I touched his dirty hand with both of mine and said Thank You back. I paid his bill when I paid mine and asked the server not to tell him who had paid it.

Like a lover having had a glimpse of The Beloved, I haven’t yet washed my hand. I don’t know if I will.

RELATED: The Pleasure of Practicing the Presence