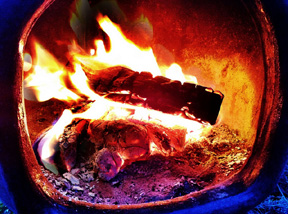 the past week, down into the 40’s at night.  About midnight  I finished final layout on the January issue of Horizons Magazine, so I make a fire in the chimenea and sat to watch it and listen to the night sounds. Fire reminds us that nothing lasts, that time consumes everything. Tonight’s fire was especially evocative as the night before, friends Marc and Traci Dicaprio’s house burned down and the family lost most of their personal belongings as well as a family pet. (Consider a love donation thru PayPal to Sororfla@yahoo.com or at  http://www.gofundme.com/itd64k.)

Fire consumes everything in its path. It strips you to the bone before leaving you in a pile of ash. When we lose our “things,” we lose part of our identity. We can also be freed of the past in a way we couldn’t have achieved otherwise. It’s one reason  a burning bowl ceremony can effect real change in leaving the past in the past. Legend has it that at the end of its life-cycle, the phoenix would build itself a nest of cinnamon twigs that it then ignited; both nest and bird burned fiercely and would be reduced to ashes, from which a new, young phoenix arose. I’m excited to see what arises for my friends now that they literally have a chance for a fresh start from zero. Infinite potential!

I love sitting before a nighttime fire alone.   Watching the flames, the fire becomes responsive and interactive and makes for a wonderful meditation. Fire teaches us about energy. It can be contained and directed to make our lives easier and happier. It can be wild and uncontrolled and destroy everything in its path.

I feel an affinity with fire. Astrologically, I have 5 planets out of 10 in the fire sign of Aries. Fire sign people tend to be active, multitasking and always on the move, in thought if not in body. Friends have remarked I’m pretty mellow for an Aries. That’s because my Aries planets are all in my 12th house, the house of the unconscious, of reflection, of things behind the scenes.

And spending time alone to quietly reflect is one of my favorite and most fulfilling pass times. I talk to so many interesting people in the course of my work that I always have questions queueing up in my mind, awaiting thought time. Sitting in front of a small fire, hot tea at my knee, warming my boots on the brick, my work day fades on wind and smoke. I breathe in the night air, I hear the crackle of the oak log and a small something scurrying alongside in the brush.

Having a monthly publication the last 22 years, my life is a series of deadlines, one after another. It’s one reason I follow the full moon.   I need order, schedules and discipline in my job as a writer and publisher, but as an Aries I need freedom and dominion over my own world. Sometimes I change my world and sometimes I change my perception of my world. When I’m feeling overwhelmed and oppressed by deadlines and appointments, that’s the time I most need to step out of my routine and sit myself outside in nature for a few hours or even overnight. Take myself away from the phone and the iPad and the computer and let the echoes from others’ voices be absorbed by the trails, the trees, the fire. 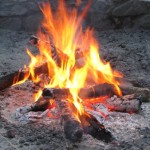 I do a lot of jobs at once, and without daily meditation I’d be a nervous wreck. Meditation is the twice daily sponge that soaks up my tension, that absorbs my stress and wicks it away from me so I can remember who I Am. And who I Am is someone who sets their own deadlines and schedule, so I can make it easy or I can make it hard.  When I begin to feel overwhelmed, I can remember to sit outside and take in a small fire to gain perspective.