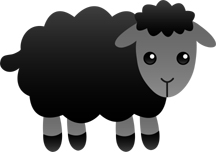 My big brother Jerry was early on dubbed the black sheep, simply because he rebelled.  He saw injustice and he stood up for us kids but the patriarch had the power to banish him from the kingdom and no one dare speak his name foreverafter. I’m sure this placed our father in his own particular hell for many years later, although I have long forgiven him.  So who gets to decide who’s the black sheep?  I’m known as the sweet but misguided one who’s going to hell because of what I believe, and believe so publicly in Horizons Magazine.   Wise words from galpal Barbara Nowak:  “The family scapegoat serves an important purpose in a hurting family: it takes the spotlight off of the real issues and projects it all on to one individual who will do “bad” for them. If children can’t get attention for being positive, they will get it anyway they can, including being “bad.” Some get “locked into” the bad drama . . courts, drugs… violence, victimization, etc. But if the person steps out of the “bad” role, it’s amazing to watch the entire family try to squeeze him/her back into it so they don’t have to look within. Any family therapist will tell you that the scapegoat is often the “healthiest” member cuz they will tell the truth (actually, scream the truth) while others play games. Long live the Black Sheep!!”

RELATED: I consider it an honor when someone uses me as the scapegoat