As I began this editorial for the May 2022 Horizons, it morphed suddenly when longtime spiritual brother Frank T. Maiello passed. We shared interest in Theosophical ageless wisdom teachings and it was thru them I learned the importance of the Wesak full Moon. May 16 is the full moon in Scorpio, known as Wesak, which is widely celebrated throughout the East as the Festival of the Buddha. For students of esoteric metaphysical philosophy aka ageless wisdom, it is the high point of the spiritual year when “forces of enlightenment ﬂow from the higher worlds into the mind of humanity.” While Buddhists celebrate Wesak as the time that marks the birth, death and enlightenment of the Buddha, ageless wisdom students regard it as a living event. At the exact moment of the May full moon — sun in Taurus, moon in Scorpio — the Buddha is said to return momentarily to earth, appearing to those gathered in a secluded valley in the Himalayas who are able to see him. Some have dreamt of being present at the ceremony. 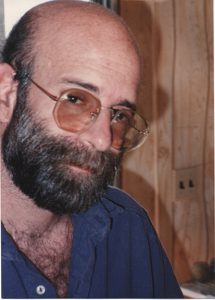 The story goes that The Christ Consciousness stands before the Buddha and, in a moment brimming with vitality and signiﬁcance, receives the Buddha’s blessing on behalf of humanity, before turning and radiating this blessing out to the assembled gathering and to all human beings. See https://www.lucistrust.org/resources/wesakfestival for a free 22 page pdf booklet giving a technique for spiritual contact during Wesak.

In the early 90’s, before Horizons, I had a small local newsletter called Into The Light based upon the ageless wisdom teachings that my friend Frank Maiello and I would study together for hours each day, primarily the Alice A. Bailey books by Lucis Trust. We joined several Theosophical/ageless wisdom study groups and thru them I met Josephine Chaudoin, former assistant to Benjamin Creme, author, lecturer and esotericist.

There I learned a process called Transmission Meditation and we’d practice together, sometimes in groups for 4 hours at a time. This wasn’t your typical short guided journey dancing with butterflies, angels and fairies to meet your spirit guide as you’d get at your new age store. These were people who knew the power of focused intent and the effect it could have on humankind. It was during this time I more fully woke up on the inner plane and was made aware of my connection to those we were meditating with and focused upon. I was made aware of how powerful it was to meditate together in a group with focused intent. Soon, even meditating at home alone at the appointed time, I would enter into a headspace that included all of them sitting with me. It felt as tangible as if we were all in the room together and we shared thoughts as well.

A Crossover between Wesak and Sai Baba groups

This was just after I became acquainted with Satya Sai Baba and his teachings and there was a lot of crossover between the groups. It was definitely a time of much learning, many manifestations, evidentials and miracles, all of it a testament to what can be accomplished with group focused intent. It took me to a whole new level in my meditation and visualization practice.

There was little to no drama in these groups like you see in so many. I’m not knocking any of the groups. When we’re called to come together, it’s for the purpose of integrating our personality with our Soul and we do that via interaction with others. Whoever ticks you off the most is your soul mate, they are your greatest teacher. They give you lotsa chances to work on patience, tolerance, acceptance and finding common ground to achieve a team goal. Stay focused on the work and either the personality clashes will stop or you’ll move on to other groups.

Even the best of friends clash from time to time

Frank and I found both types of groups and had a few clashes of our own. For the most part, we could rationally discuss our issues in light of the teachings and easily move past it. But as much as you think you know, no one is immune to emotional flareups. Our 2 big egos, sometime it was a sh*tshow that played out during group. We once spent 7 years not speaking then reconnected on Facebook and laughed at ourselves. I counted Frank as a soul mate, and it wasn’t always study, study, study. Sometimes we’d watch 1930’s and 40’s horror flix: Bela Lugosi, Boris Karloff, Lon Chaney, Jr. and speculate on the metaphysical implications of the films. Fun times!

Last month, my beloved Frank Maiello passed in The Phillipines, heart attack, unexpected, while he slept in the arms of his loving wife Tessa. That’s how I want to go. Not expecting it, surrounded by loved ones. Frank has 2 sons, Charles (so proud of him, like the son I never had) and Ram. Frank had an intense and complex personality, which those of you who knew him well know. (Smile.) He wasn’t always understood but he was ok with that. He had massive esoteric metaphysical knowledge and knew that wasn’t everyone’s bag. But that meant he understood there is no death.

He was a musical genius who knew some heavy hitters, he introduced me to Richie Havens back in the day. I know we’ll meet again.

One thing that period of heavy duty study time together in the 90’s did for me was take me into that DEEP PLACE where I gained the absolute knowing that THERE IS NO DEATH. I believed it as a concept before but in the 90’s I got evidence and revelations that dissolved the veil for me for good. I was grateful for the understanding in 1996 when both my mother and husband died. I’ve never felt apart from either, tho, nor from anyone who’s passed.

I know we’ll meet again and can communicate now.

Rambling Thoughts to end my May editorial

In March 2020 my life began to morph. I dinged my knee and had to stay off it 6 weeks so I signed up for grocery delivery. The knee’s fine now but it was perfect timing when the pandemic arrived. Delivery saves me so much time I’ll keep doing it. My business changed as I wasn’t walking mags into the stores anymore, many closed because of the pandemic.

I saw only delivery people and neighbors at home. I got to know a lot of neighbors as I’d be working in the yard during busy morning walk times. I discovered I’ve got some really cool neighbors!

I began an herb and vegetable garden when supplies weren’t always on grocery shelves. It was a booming tomato, basil and collard season, keeping me busy dawn to dusk. It also kept me hopeful that no matter what was going on with the economy or the pandemic, I’d find a way to make it because I always had.

It was a wacky 2 years of me, on one hand suddenly having lotsa free time and, on the other hand, having ALL my unconscious resistance show up in the form of the worst pollen allergy season EVER as well as hand, arm and knee injuries due to over-doing. It’s all fine now but it was kinda cool that I’d get daily adventures to overcome or work around. I learned to more fully go with the flow and more easily surf the energy of the day.

I didn’t do a lot of writing my thoughts down except on Facebook, so thoughts and ideas had time to percolate. I gained a deeper appreciation of the ordinary stuff of my life. By 2021 I’d taught myself via YouTube and TikTok to cook my favorite Thai, Cantonese and Vietnamese dishes and make healthier – less sweet, salty, fatty — versions. I learned I’m a great cook.

Life is good. I can’t think of anything I’d change. Enjoy our offering this month. Hari Om.