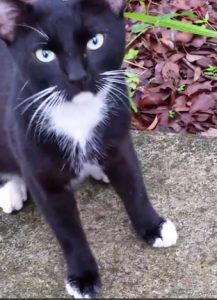 A young black cat with white bib has been resting mornings on the concrete bench in the courtyard outside my office window.  When he first arrives, he sits upright facing me, looking like a dapper gent in a tux. I put some dry food out for him.  I’d say he’s almost a year old. He’s sleek, not ragged, not starving — not fixed! If I see no signs he belongs to someone, I’ll take him in for initial shots and neutering. You come in my yard, you play by my rules. This morning after meditation I went outside to see the source of Benny meowing. He was on the driveway looking toward the road, where Tuxedo Sam was standing. They weren’t fighting and Benny wasn’t howling. He’d just meowed once. I explained to Sam that Benny was the king of this yard and it was his decision whether Sammy was invited or not. I gave Benny some head scratches. I brought out some kibble for the concrete bench. Benny heard it and came running. I picked him up and took him inside, so he knows I put the food down for Sam. I looked out the window and he was eating it. Benny saw it, too. I explained to Benny that it might be temporary until we get Sam fixed, or he might have a new friend. It’s too soon to tell. And since Benny was alone and hungry at that age, I don’t want him thinking he’s going to be replaced. But maybe if he thinks it’s his idea, he can have a little brother.   Here’s the timeline of Sam’s arrival.

May 29
I opened the front door to call Benny, he was already at the front door, Tuxedo Sam was 10 feet away. He meowed and moved away when he saw me. I took him a handful of dried food. He meowed several times and let me get 5 feet away. I think he and Benny hang out together, they were not fighting. Benny is I think 4 years old and Sam looks about a year old. I am glad Benny has a friend. I think it’s important the elders show the youngbloods the ways of the world.

May 31
Tuxedo Sam came by for a sunset dinner and a scratch behind the ears. He let me pet him for about 15 minutes and even pick him up several times. He’s outside on the concrete bench right now. If it rains, I’ve been mentally sending him pictures that he can step into the garage or onto the back porch. Or he can go to whatever secret place it is that Benny goes when he stays out during the rain. I thought Sam was about a year old but he may be younger. After he scarfed up a handful of food in a very few minutes, I brought him out a can and he scarfed that up as well. Benny sat outside for the longest this morning just observing Sam walk back and forth from the concrete bench in the courtyard to the water pail in the east garden. Ben did not seem fazed by him. I made sure to give Benny a lot of ear scratches and hugs when he was out there for Sam to see that Benny is the king. As long as he knows the pecking order and that Ben is Top Cat, everything will be fine.

June 1
7:45am ET I was surprised to see young Sam challenge Benny out on the driveway. 5 minutes later Benny was still on the driveway and Sam is on the concrete bench outside my office window. They are out of sight of each other but I’m sure each one energetically knows the other is just on the other side of the bushes. I’ve been walking outside every few minutes to see how they are faring together and just caught them sparring at the edge of the lot. Sam charged Benny and they went into a tussle. I was proud of Benny for maintaining a defensive posture and not beating the youngblood up. I chased Sam off and carried Benny inside and he seems happy to be locked in for a while.

430pm ET I just came in from calling for Benny and did not see him or Sam. The wind is picking up and there’s a light rain falling. Under the canopy of the oak and pine trees, I stayed fairly dry. I went into the shed to pull out the giant umbrella that attaches in the center of the cement table and bench and found that I likely gave it away in the giant shed clean out last year. I took a lap around the yard seeing where a kitty might hole up if he was caught in the downpour? Because very often it’ll be pouring outside and I don’t know where Benny stays when that happens. I found the repotting corner of the east garden they could stay dry in the corner under a couple of tables. Also the screen is torn so they could jump right onto the back porch. I don’t want to introduce Sam to the inside of the house until he’s been treated for fleas.

6:30pm Benny came in about 6 p.m. and Tuxedo Sam showed up on the concrete table in the courtyard about 20 minutes later. I put a large umbrella over the table to keep the top of it dry for him. He let me pet him while he ate. Benny came back out and checked out the scene but did not seem concerned with it. I carried Ben back inside and he’s on lockdown for the night. Sam is asleep on the concrete bench.