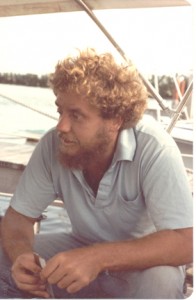 A friend emailed me a recipe for a frittata this week, and Cousin heard me laughing when it came in.  What’s so funny about a frittata? he asked.  A frittata is an unturned unfolded omelette, similar to a stovetop quiche, which is best served right off the stove.  It has a wonderful creamy texture when eaten within moments of being cooked.  If it sits too long, it is less tasty, kind of like cold scrambled eggs.  Ugh.  Why is that funny?  The email came from a good buddy of mine, whom I went on a three month sailing trip with in 1983.  Mark Tietig, now an attorney who handles civil rights cases, notably the “Topfree 10” in Florida, was blinded in a sailing accident in 1979.  We met in 1982 and become fast friends immediately.  An avid sailor before being blinded, Mark taught me how to sail and in 1983 we embarked upon what would be a three month sailing trip up the coast from Miami to Annapolis in his 33′ Cheoy Lee cutter rigged sailboat, La Calma.

Accompanying us was a young English captain named Alistair.  Mark had all sorts of neat navigational equipment that talked to him and gave commands out loud.  He could tell what the wind was doing by how the sails sounded, and he could sheet them properly by the sound and feel of it.  Mark’s German Shepherd guide dog Heath accompanied us as well, and he loved to sail.  My job was to keep an eye on Heath and to make the meals for us during the trip.  Now we come to the frittata…

We spent half our time going up the Florida Waterway, which was fun like a train ride is fun, going along the back yard of people’s houses and estates, and checking out the local river life.  But we’d have to motor up the Waterway and the sound of the engine muted all the sound of nature which was what we really wanted to be in in the first place, so we’d find the next inlet and head outside to the ocean where we could sail and heard the waves splash and the seagulls cry and the wind sing.

One morning we were headed out of an Inlet toward the Gulfstream and I decided to make a big frittata for breakfast. The big joke was always what would prevent us from eating it right away, while it tasted best?  In the past, the interruptions had been phone calls or football games on tv.  We had none of that now!  We looked forward to a yummy frittata.  Mmmmm, onions, ham, cheese, eggs, butter all coming together in creamy deliciousness.  We could hardly wait.

Just as the frittata is going into the pan, Mark calls me on deck.  I see the Coast Guard boat approaching and Mark is smirking because yet another frittata is going to be eaten late. Even Heath is smirking.  The Coast Guard guys step aboard and as Mark and Alistair answer their questions and show the documentation, I go below to tend to the frittata.  So far, so good, but it’s gotta come out of the pan right now.

I pop my head out of the main hatch and ask how many are eating, since this frittata WILL be eaten when it is ready, which is in about 60 seconds. I ask the Coast Guard guys if they could either be done right away, or else take a break with us so we can enjoy breakfast while it was hot.  If they knew the delicate nature of my magical fritts, they would understand. Mark agreed.

They were done anyway, so they declined the offer of breakfast.  Good dedication to job, I thought, since it smelled so yummy.  We had our frittata on time.

Military intervention or not, no one messes with Andrea’s frittatas anymore.