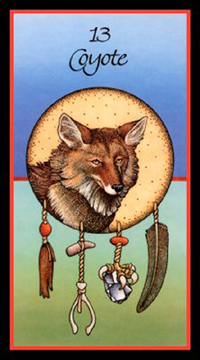 In the Navajo and some other cultures, it is an insult to refer to someone as coyote.  Greed, thievery, gluttony, and being obsessed with roadrunners are all part of the shadow medicine of Coyote nature. This person may prove to be a teacher for others but he will do so by negative example.  Robert Oakes writes in Coyote Medicine: Coyote often talks either backwards or in riddles.  Coyote is about waking people from their slumber; shocking them if that is what is necessary to get them to open their eyes.  Coyote Medicine is about stopping people from acting out of habit.  All too often we follow tradition to the point where it loses meaning and significance.  According to Coyote nothing is sacred and all things are sacred; all teachings are inherently wrong and inherently right. Coyotes are teachers, but not in the straightforward way that most people expect.  Coyote teaches us by his folly and misadventure.  Coyote is the mirror that shows us our shadow and makes us laugh at the same time.

Coyote is one of the totems the Heyoka often carries.  Along with Crow and Raven they are the trickster teachers.  We almost always benefit from Coyote’s teaching but often there is a price paid for the knowledge.  These are not theoretical teachings but are in fact lessons learned by experience.

Most people miss the message with Coyote. They either think he is being silly or disrespectful.  He is neither, he is just trying to get you take an honest look at your own actions. Often times there are layers to Coyote’s teachings and just when you think you have understood the meaning, you discover a new level that contradicts what you have just learned.

Anything that gets us to take a hard look at ourselves, poke fun at the sacred, and make us laugh in the process falls under the domain of Coyote.  The Medicine Coyote carries is that of a mirror, which is not always an easy pill to swallow.  In this mirror we see Truth; it may wear disguises and make us laugh but it is still Truth at its very heart.

For those that carry Coyote as their shadow Medicine, the personality can come across in less than appealing ways.  Greed, thievery, gluttony, and being obsessed with roadrunners are all part of the shadow medicine of Coyote nature. Coyote is also a survivor.  No matter how hard man has tried to drive off Coyote, they have managed not only to hold their own but actually increase in numbers.  Today Coyote’s range is far greater than it ever was, and due to his resourcefulness has not only managed to live next to man but thrive in those conditions.  Even large metropolitan cities have wild Coyotes living in their midst.  Resourcefulness is one of the Medicines Coyote people carry.  Even in bleak conditions they can figure out a way not only to survive but prosper. Coyotes always adapt to changing circumstances. Remember it was Coyote that figured out how to steal fire from the Gods when man was freezing.

From http://timysteries.org/2013/08/31/13-coyote-trickster/
No one can blindly do themselves or others in with more grace and ease than this holy trickster. Many native cultures call Coyote the “Medicine Dog.”  Coyote will turn your life upside down and teach you a lesson about yourself.  Coyote moves from one disaster to the next, he refines the art of self-sabotage to sheer perfection.  Coyote is sacred. In the folly of his acts we see our own foolishness. Coyote takes himself so seriously at times that he cannot see the obvious. For instance, the steam roller that is about to run over him, so often set in motion by himself. That is why, when it hits him, he still can not believe it.  Coyote has many magical powers, but they do not always work in his favor. His own trickery fools him. He is the master trickster who tricks himself. Ho one is more astonished than Coyote at the outcome of his own tricks. He falls into his own trap. And yet he somehow manages to survive. He may be banged and bruised by the experience, but he soon goes on his way to even greater error, forgetting to learn from his mistakes. He may have lost the battle, but he is never beaten. Coyote teaches us the beauty of our trust and innocence until we become too serious, then Coyote backtracks to trick us out of the pompousness that masks our fears and seriousness. If we forget to be children and take life with laughter and ease, Coyote appears to pester us until we let go of the inner pain that keeps us from knowing the joys of life.

Contained within the trickster medicine is the humor of the ages. The cosmic joke is not just on ourselves but on everybody else, if they are following Coyote or have strong Coyote medicine. Someone like this may be able to convince others that a skunk smells like roses, but the fact remains that it is still a skunk.

Tale of an urban coyote: New healer in town