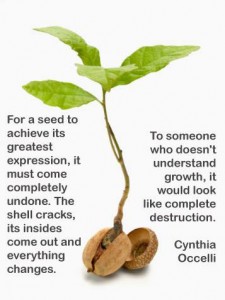 In the work I do, my experience is we exist in our consciousness — in our mind — which is why “we” don’t die when the body and brain dies. “We” don’t have to have a body in order to exist and be productive. CAN YOU DIG IT? Would God intervene to prevent the caterpillar from becoming a butterfly, a tadpole from becoming a frog? Would He stop an acorn from tearing apart in order to grow into an oak? The surface shell dies away, our essential self remains alert and conscious inside, ready to awaken into the next dream. What would happen if God kept the little seeds intact so the Mother oak didn’t watch all her seeds split apart and crumble into mulch? We’d never see the glory of another oak.

RELATED:  Her perception upon dying
Hard as it is, get used to death
How to forgive and find closure if the other is unwilling, absent or dead
A Friend and I Talk About Dying and Easy Transitions
Why pretend loved ones aren’t going to die? Let’s get over the fear