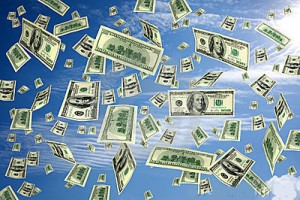 After yesterday’s post A Creative Visualization to Attract Dollars, my friend Domino wrote me: I know this might sound ridiculous, but I feel loads of resistance to visualizing checks payable to me in a mailbox coming from “out of the blue.” I get paid the same amounts from the same sources and they’re all direct deposited. I find my analytical mind getting in the way of my visualizing. And I can literally FEEL the resistance. How can I get past that? I would definitely appreciate any tips you might have toward getting past this. My mind gets in my way. HELP!

I replied: This is a great question, since when I worked for the law offices, all I got as far as income was my paycheck and I had no investments or anything else to look forward to out of the blue.  That’s the whole task in attracting what you want, is getting over the resistance. 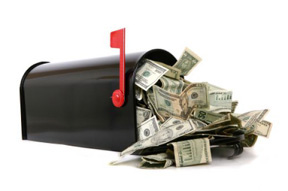 When I first began doing the mailbox visualization, I was just doing it for fun, not knowing or wondering too much about where it would actually come from.  Then suddenly I begin to get calls to notarize papers at the law office and people wanting to pay me for doing it.  It was just a little bit here and there, and I did it for awhile before I realized it was extra income and some weeks it was a pretty penny.

Then I got the idea to do some legal forms preparation on evenings and weekends and put a 2 line listing in the yellow pages and also an ad in The Little Paper (a former advertising publication in town) to do uncontested divorces, property settlement agreements, powers of attorney and wills.  It was the early 90’s and I was working at a law office and doing collections for several attorneys, so I began a collection business of my own.

That’s how I began doing the legal work on the side, I’d done collections for several attorneys I’d worked with before, and I was good at that.  It was when I was doing a lot of Wills for people that I began doing readings for money also, and fell into a job with the Psychic Friends Network.  By then we’d also begun the magazine.

I went on to make suggestions for her to set up her own small business.

Did I grow up thinking I want to have a collection agency or I want to have a legal forms prep biz or I wanted to create websites or be a psychic reader for a living?  No, but they are things I fell into as I kept reminding myself that dollars can come to me out of the blue, from somewhere I don’t expect.  A perfect and true example:

A law office client in the 70’s, whom I barely remembered, 15 years later left me a gift in his Will because of what he saw as my extreme kindness to his grandson whom we represented on a criminal charge.  He left me $7,500 and a piece of land I later sold for $12,000.  I barely remembered the client and certainly didn’t treat him any differently than I’d treat anyone else.  But that proved to me that dollars can come out of places I have no idea of expecting it.  And years later.

If you ponder the acorn analogy, that’s helpful.  I used to be real mental, real left brained and analytical, I didn’t think I could change but I did.  So there’s hope for you, too!

Domino responded: Wow, this stuff really flows from you. Got to be honest, I suck at sales. And that’s kinda how I see debt collection. Not to mention the karma attached for me on that issue. I’ve slammed many a phone on debt collectors. And you wouldn’t even wanna hear the words that came screaming outta my mouth. I probably should reinstate my Notary. Just lazy I guess. But I will use your ideas to convince my mind that ideas can come out of the blue. When I messaged you I didn’t expect you to message back with money-making ideas but you did. So that in and of itself will be helpful.

I really think I need to find a way to detach my attachment to struggle. I’ve struggled all my life, financially, family-wise, relationships, jobs, that it’s become a way of life. I see that. And I’m pretty sure as a result I’ve formed an attachment to it. Maybe I need some type of deprogramming. If you know of or have some tapes, CD’s, DVD’s, books, on just such a thing I’d be open to it. That might be my starting gate. I’m sure others have other issues and blocks. I think after babbling now in this email that this might just be mine. (AHA) Attachment to struggle! So Andrea, if you’re still awake after all this verbage and you can refer me to some deprogramming materials, THAT WOULD BE AWESOME.
### end of our emails

I am a big proponent of the Abraham-Hicks work, which helped crack my mind open.