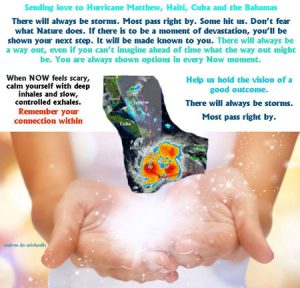 Per the 8:00am NHC Advisory, Hurricane Matthew has winds of 125 mph and is moving NW 12 mph. If it makes the expected landfall near West Palm Beach after midnight tomorrow morning, it may pass over Brevard/Melbourne by noon and Daytona Beach about 8 hours later. Some reporters are saying 145 mph winds when the NHC data doesn’t say that. Listeners hear that and think it’s true when it is just someone’s speculation. Don’t foster fear. Hurricane force winds are 40 miles from center and tropical storm force winds 160 miles from center, so we’ll feel it. We’re battened down, well supplied and holding the vision of Matthew’s quick passing, preferably offshore, and rapid restoration of power. Hold the vision with us?