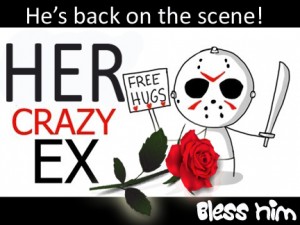 The awkward moment when you see a friend post on Facebook that she’s in a relationship with someone you know to be a sociopath who historically overlaps engagements. Some long time friends have never seen his crazy come out. Sometimes it takes awhile. Like the first time you have a disagreement, ask him to get a job or pay a bill. He is clearly not like this with everyone, and the point isn’t about one person. This is a caveat to know who you’re dealing with. In the past, I’ve kept quiet to the detriment of several situations.  Take the time to know someone. It doesn’t matter to me if there are 200 people I trust telling me what a great guy someone is around them. I can’t pretend I don’t know firsthand what one man is capable of.  Even now a year later he’s suing the fiancee he left 2 years ago. He’d fooled her twice. In July 2011, I wrote about The ladies man who presents himself as a guru and a soulmate.  In August 2013, his then- fiancee made a Facebook post she was heartbroken and devastated that he could leave her, literally bedridden, after promising he was brought into her life to help her heal from other physical problems. I know him to be a sociopath and a narcisscist a decade before her. I sent her a note of support and we had a brief private conversation.

She wrote “he’s been with me pretty much 24/7 for over a year, so I know he’s not been cheating.” I knew he became engaged to her within weeks of leaving his last (secret) relationship. I didn’t need to tell her that. A day later she wrote on my FB wall, “Thank you, Andrea, I grew up a little bit more today.” A day later, she said she’d done her own research, including speaking with her ex. He’d convinced her that based on my intervention, they were now back together and had me to thank for it. It would be laughable in that I expected no less from him, laughable except that this is a woman’s heart and mind and health he is playing with. A woman with small children living in the same home with her. Under no circumstances is that funny.

She was (rightfully, because she didn’t have the facts and was believing only what he said) irked at me and let me know in no uncertain terms what she thought of me. That’s fine. He was likely standing over her telling her what to type. I understand. Love makes us do wild things. Been there, done that. I get it. She made a bit of a threat in a Facebook message so I told her no hard feeling but I’d block her until they were apart again. I blocked her.

Her ex is always ready to do the Light vs. Dark battle, it’s always Us vs. Them with him. When there was no one to fight, well, he was stuck being merely in a family relationship with a loving, trusting woman and mother who defends his honor loud and long. Out of the fanfare. No plebian life for him. Time to move on.

For her, painful as it may be, it’s the good news. There’s no shame in having someone take advantage of your good nature. If they do you wrong, they make you strong. Rejection is protection. Now it just takes time being focused in a new direction, and that will come. I am here for her if she chooses to re-engage me. I never hold against someone what they’ve said in anger to me over misinformation or in bouts of mental strain. WE are ALL there is. If we’re not here for each other, what’s the point? I unblocked her if she wants to connect. And we never have to talk about that topic again.

UPDATE: Two months after I wrote this, he left again*, contacting all her friends telling them how crazy and unstable she is. That’s what they do. He’s also suing her. When anyone claims to have a bunch of crazy exes, ask yourself what the common denominator is. This is what I wrote about him –> The ladies man who presents himself as a guru and a soulmate.

*The point of this post isn’t just about one person. I share these here because it is a Universal scenario. In the last 30 years I’ve counseled with hundreds of women with the same story. If this opens the eyes of one person and saves her from mental trauma, that’s what it’s meant to do.
From her posts August 2013: How many times I heard my ex tell stories about what an insane, psycho bitch his ex-wife was, how frigid and unloving his common-law wife was, and how stupid and useless his first wife was. IT’S NEVER THE NARCISSIST’S FAULT. Did you know I’m a terrible mother who’s mentally unstable and belongs in a psychiatric institution? That’s the story he tells about ME. If you’re his next victim–don’t worry, eventually he’ll have a defaming story to tell about you, too. And when he tells it, they’ll be a tear in his eye and a sad little catch in his voice, poor dear. The moral: Learn to identify and stay away from narcissists. 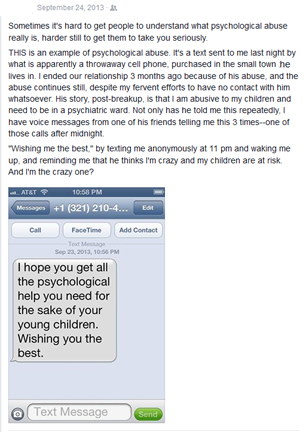 Psychopaths look just like the rest of us. If you want to try to pick them out, look for the trail of disaster that follows them. Look for the string of jobs they can’t keep (because they can’t get along with anyone, although that won’t be the reason they tell you) or the “crazy” women from past relationships (they tells you they’re crazy so you won’t believe them when they try to tell people they were abused). Look for the stories that don’t add up, or the kids they don’t support. Look for the arrogance, and the failure to ever accept responsibility for a mistake. And the lies… oh, the lies…

We apologize, My sisters and I.

If our misery and healing process, has caused you any distress.
He is indeed Prince Charming, each of us own a pair of sparkling, glass slippers.
We have wet them with our tears, and polished them with our pain.
We are sorry if our anger, interrupts your date night.
It is part of the process, of healing, and letting him go,
Remembering that our interrupted date nights,
Were shattered by the anger of those who went before.

We are sorry,
If we cannot tell others,
How wonderful he is.
There have been enough lies,
That’s his style, not ours.
We are sorry if our crazy,
Bi-polar, borderline, behavior,
Is destroying the best days of your life,
He singled us out,
Because of these traits,
Or drove us to them.

Something about us,
Each one of us,
Attracted him to us,
As he is attracted to you.

Our deepest apologies,
If our friends and family who love us,
Attack him, or speak badly of him,
It’s about us, not you,
And one day, you might discover,
That friends are a good thing to have.

Yes, we are sorry,
If we caused any trouble,
We sincerely hope that you are as happy with him,
As we were before he found us to be,
Inferior, unattractive, lacking,
Having outlived our usefulness.

We are not crazy,
But we once were,
But now that the virus has been neutralized,
Our healing can begin.

Congratulations,
On your new love.
We are crazy,
Like all our sisters before us,
And I’m sure things are different for you.