Hello and welcome to the April 2007 edition of Horizons Magazine. I feel like I live in a Disney movie. I walk outside each morning to put out birdseed for the cardinals, jays, woodpeckers, etc. and I watch squirrels chase each other across the long oak branches. I water a few plants, twist some vines in a new direction, munch a fresh basil leaf and rub fresh rosemary in my hair. I watch the baby lizards scampering about, and rake the leaves into a pile for the cats to jump into. Lately I’ve been raking leaves like crazy! The cold snaps back and forth the past two months have tricked the trees into thinking it’s autumn, so they’ve all been shedding their leaves. Even my bamboo took a rest from its breakneck speed growth and literally covered the ground beneath it in inches of feather-downy leaves. I love that the cooler weather this late in the season lets us know we will once again have a mild storm season.

I had a week’s worth of a head cold and sore throat last month. For several days, I was walking around in a fog. I spent a lot of time sleeping and blowing my nose and coughing. I had to concentrate to understand what anyone was saying to me. My thoughts felt very clouded and foggy. I knew it was just a cold and it would pass, but I let myself be whiney and gripey to friends about how I felt. Great – as soon as I began doing that, all guidance stopped flowing for me. I thought I couldn’t meditate, however I was just making an excuse since meditating was not so easy when I felt icky. I chose not to hold a thought when I could have, with a little more effort. I chose to release thoughts and go to sleep, when I could have sat and practiced just 10 minutes more to “officially” complete a session.

I am not one to wallow for long when I get like this, but I have learned to allow myself a few days wallow time to get it of of my system. But this time I was also beating myself up for wallowing…

My world became a very small place during that time, consisting only of my grumpy thoughts and my snoozy, sniffling body all going round and round like on a hamster wheel, going nowhere. I’d turn on the radio and none of the songs spoke to me. I’d go to the market and none of the produce reached out to be taken home. My cats were all off having fun elsewhere when I was in my mood like that.

So that’s what friends are for. Luckily I had a good friend close at hand to remind me what I already knew. That I create – through my own perception – my own reality. I really had nothing to complain about. My work was caught up, I was catching up on lots of sleep, and I had a great mate and cheerleader to keep me entertained.

As soon as I began remembering who I really was, my world began changing and I began to feel better. Birds sang to me. Every song on the radio had a message for me. The face in the mirror smiled back, and the cats came out from their hiding places wanting cuddles and rubs. Checks began pouring in from the billing I begrudgingly did when I was getting sick.

As I widened my perception, my world became huge, internal and external. I was once again able to meditate and feel response. I felt like the old me. The real me. When all along, the real Me never left, it was just covered over by the overlay of my smaller self, all shrinkwrapped into its own headtrip. I’m glad when I can catch myself being in that place and get myself out of it. Or allow a friend to motivate me out of it. 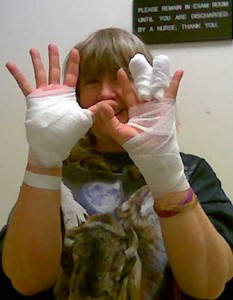 Three days after I wrote the above, when I felt I was OUT of my downward-spiral-mood-wallowing, the Universe showed me evidence of past momentum catching up with me. Late in the afternoon, a neighbor’s big dog came into my yard after my little tortoiseshell kitty, Shakti. Two days later I sent this email out to friends:

Long story short: Tuesday a neighbor’s dog came into my yard after my Shakti kitty. I ran out and intervened. Sparing the gruesome details – poor Chuck was inside installing my new computer and saw from window – a wild 10 minutes later, I was on the way to the vet with Shakti, who did not make it. Then on to the emergency room to take care of my hands, which got dog bit several times as I reached in to grab my kitty away. Below is cell phone pic taken at hospital. I’m fine. Please say prayers for lil Shakti on her way to her next incarnation, and a prayer for my paws to heal fast *thanks* I love you all.

PS if I owe you a phone call or am working on your ad for the April Horizons, bear with me, I will get to it and it WILL go in

Now I know how a mom feels when she is able to lift a car off her child with what seems like super human strength! I had no idea how I would react in that situation and apparently I jumped right in, I guess thinking I would just lift her out and go on my merry way. Well, that didn’t happen… but I did ponder the fact that for the few days previous, I did let myself get gripey and whiney, even when I knew better.

Even when I knew that wouldn’t help. Even when I knew that would attract more for me to gripe and whine about.  Which is – no surprise – exactly what happened! And if I am who I say I am, then I have to take responsibility for what I attract into my experience. And if I am who I say who I am, I know how powerful my thoughts are and I have no excuse for letting myself go into the downward mood spiral, no matter what appears to be going on in my life.

It was several days later, after I spent some time pondering the implication of the thoughts involved in the attraction process, before I was able to write this letter to the dog owner:

Hello, I am the one that was bitten by your dog on Tuesday March 13, 2007. I am still waiting to hear from Animal Control whether your dog had its rabies shots up to date. I would appreciate knowing that info as soon as I can. First let me say I am not going to sue you. I know you will have many fines to pay and I assume since you live on my street that your income is about what mine is. I took my cat to the vet after your dog attacked her. Since she died, the vet bill was only $__. I went to the Palm Bay Hospital Emergency Room where they treated the punctures and bites on my hands and they estimated my bill should be about $__. I have not received the bill. They asked for a $__ deposit before I left the hospital, which I gave them. On the way home, I filled two prescriptions which came to $__. I also purchased bandages, bandaids, tape and Neosporin for $__.

My left ring finger is infected and I am having it looked at this afternoon. I am not going to talk about how this is your responsibility to have the dog under control, etc. because I’m sure you know that and do the best you can raising your boys alone and working at the same time. I know that isn’t easy. What I am going to do is let you know what my costs are. If you were able to pay me back, that would be helpful and I’d appreciate it. But I am not going to demand it. Maybe I could have the boys do some yard work for me during the summer to pay me back. They seem like good kids and were trying to help while the attack was going on, but the dog didn’t listen to them. Yes, they should have had him on a leash, but the fact is they didn’t know how to help once he began attacking.

They could have just run away and I would never have known where they lived, but they stayed and the blonde one apologized to me. I appreciate his honesty and integrity and you should be proud of him for that.
### end of letter

I didn’t want her and her family to feel uncomfortable in their own neighborhood. If I am who I say I am, then I take responsibility for bringing harmony to all my relationships. After reflection, it was an easy call. 12 hours earlier, I couldn’t have written that letter.

Final note: As I went to press, I learned she signed the dog over to Animal Control, and it had no tags or shots.  However, 6 months later had got the dog back. My friend Sharon Janis responded to my email: You sure are an amazing example of what a spiritual view of life can do with even the most troubling times! The photo says it all.

To that I was going to joke and say: “Well, it’s nice I give that impression anyway.” But the truth is, I am thankful I have put the time in to cultivate a spiritual view and a (relatively) mindful lifestyle. The fruit of my habit of practice is being able to weather the not-so-fun times of life with some equanimity. To get through life’s changes without being emotionally off balance for very long each time. It’s not that nothing shakes me, it’s just that I don’t stay down for long. One of my favorite prayers is “Guide me to do God’s will and give me strength to bear God’s will.” So far, it seems to be working. I never get more than I can handle.

So this month I’ve learned or been reminded of:

1. When I am in a down mood, I am introducing confusion into my vibration.

2. When I am in a downward mood, the faster I can self-talk myself into a happier feeling place, the better conditions will get, and the quicker it will happen.

3. Past momentum is always a factor in what I see evidence of in my daily experience

4. I can be the one who brings harmony to all my relationships.

5. The fruit of putting time in to cultivate a mindful lifestyle is being able to weather the not-so-fun times of life with equanimity.