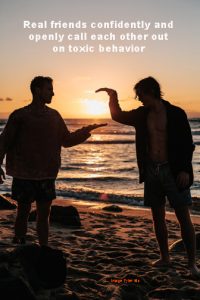 A friend asked in a Facebook group, “Can you confidently and openly call your friends out on their toxic behavior? Or are you afraid they will take it wrong and you would prefer not hurt them?” I said “We call each other out on our stuff, and are glad when they do the same for us.” He responded, “Man, I wish guys shared this mentality.”
I said, “The ones who can’t and don’t didn’t recognize or target any role models for it. Their dads weren’t taught that, nor their dad’s dads. It was a harder life then so the rules were diff. Doesn’t make it right but leaves them without tools to build “real” friendships.  Hanging out and partying is fun to a point, then as friends slip away into other relationships and other priorities, so many guys are left alone with insufficient communication skills, which makes them lead lives that could be much happier if they’d practiced that skill all along.

From what I’ve seen, basically, you hit 40 and you’re not working toward some goals and have some kinda communication skills, chicks don’t wanna waste time on that. Unless you dazzle them with bling but that can be exhausting for everyone.

I’ve had friends tell me I’m bossy and pushy and aggressive and passive aggressive and selfish and they were right. When I hear it now, I ask myself, what made me respond as I did? Is that how I want to show up? How can I better respond in the future?

Do I wanna be seen as someone I’d be eager to be friends with?
Or does that even matter if I’m happy in my own little world?