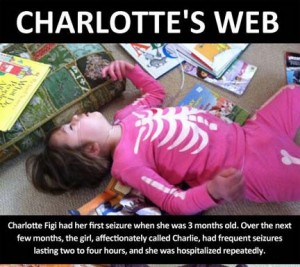 The three year old had been having 300 grand mal seizures every week since age 3 months. The first time she was given cannabis oil, her seizures stopped for 7 days. This is what legalization is all about. Charlotte Figi was diagnosed with Dravet Syndrome. Her father scoured the Internet looking for anything that would help her. He found a video online of a California boy whose Dravet was being successfully treated with cannabis. The strain was low in tetrahydrocannabinol, or THC, the compound in marijuana that’s psychoactive. It was also high in cannabidiol, or CBD, which has medicinal properties but no psychoactivity. Scientists think the CBD quiets the excessive electrical and chemical activity in the brain that causes seizures. It had worked in this boy; his parents saw a major reduction in the seizures. 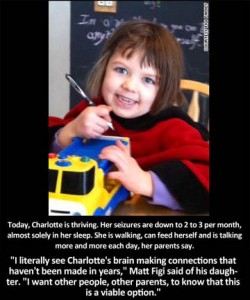 By then Charlotte had lost the ability to walk, talk and eat. She was having 300 grand mal seizures a week.  The first time the child was given a dose of cannabis oil, her seizures stopped for 7 days.  Today, Charlotte, 6, is thriving. Her seizures only happen two to three times per month, almost solely in her sleep. Not only is she walking, she can ride her bicycle. She feeds herself and is talking more and more each day.  “I literally see Charlotte’s brain making connections that haven’t been made in years,” her father said. “My thought now is, why were we the ones that had to go out and find this cure? This natural cure? How come a doctor didn’t know about this? How come they didn’t make me aware of this?”  The marijuana strain Charlotte and now 41 other patients use to ease painful symptoms of diseases such as epilepsy and cancer has been named after the little girl who is getting her life back one day at a time. It’s called Charlotte’s Web.