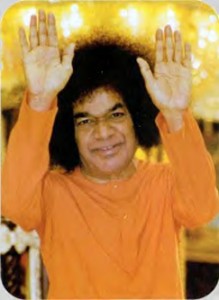 I received this from my friend Nigel Taylor:  The Year 2012 according to Sai Baba. An extract from a 2010 conversation between a reporter and the social and spiritual reformer of India, Sathya Sai Baba.

Question: “Have you heard of the year 2012 like a year where something will happen?”

Baba:  The truth is that the planet has been changing its vibratory state, and this change has intensified since the year 1989 where the magnetic poles have moved the last 20 years more than the past 2000. Well, in one way there are several prophecies that signal this date like a term or important conclusion in the history of humanity, but the most significant is the end of the Mayan calendar, which prophecy has been interpreted in different ways. The most negative ones think that during this year the world will end, but it will not be like that, it is known that during that year a new era will start, the Age of Aquarius.

This has to do with the rotation of the whole solar system (solar cycle) that goes passing through the different eras each one of them lasts 5125 years. The era in which we now are, called the Age of Pisces, started on the year 3113 B.C. and ends on 2012. If there is a change on the earth’s magnetism, there is a change on the consciousness and also an adaptation at the physical level for this new vibration. The changes are not only on our planet, but also affect the whole universe, and today’s science can verify that.

Inform yourself about the changes on the solar storms (that are magnetic storms) and you will see that scientists are up to date with these things, or ask about the movement of the magnetic poles during the last years, and airports having to modify their instruments.

This change on the magnetism translates or it’s perceived as an increment of light, or an increase on the planet’s vibration. For you to understand it easily you must know that this vibration is affected and intensified due to the consciousness of all human beings. Each thought, each emotion, each new awakening of a human being towards the consciousness of God elevates the vibration of the planet. This might seem a paradox, due to the fact that the majority sees around themselves more hatred and misery, but this is not so. There are many, even if I would like them to be more, that are trying to get out of darkness to grow and become a better Son of God. I have been saying this on previous messages, each one chooses where to focus the view, and those who only see the darkness are focused on the drama, the pain and the injustice. If you don’t see the spiritual advancement that humanity has made it is because you haven’t focused on it, but if you do the right work and liberate your mind of the negative you will open a space where you will be able to manifest your divine essence that will put on the focus of what is really happening with humanity and the planet.

Humanity is elevating its consciousness as never before.

Question: “But how!…Can’t you see the darkness?”

Baba:  Yes, I see it, but I don’t identify Myself with it, I’m not afraid of it…How can I fear darkness if I see such clear light?…Of course I understand those who fear, because I have also been standing where I could only see the evil. This is why now I feel love for all of that. Darkness it’s not a force contrary to the light, it is absence of light. You cannot invade the light with darkness, that is not how the principle of light works. Fear, drama, injustice, hate and sadness only exist in states of darkness, because you can’t see the global context in which your life develops, and the only way to see from the light when you are there is through faith. Once you have increased your vibration and frequency (state of consciousness) you will be able to see towards darkness and understand what you have lived.

Question: “But…How can you say this if there is more evil in the world everyday?”

Baba:  There is not more evil…there is “more light,” and that is what I’m talking about on this message. Imagine that you have a room or warehouse where for years you have been storing your things and is lit by a 40 w. bulb. Change the bulb to a 100 w. and you will see what happens. You will see the mess and the dust you didn’t think existed. The dirt will be clearer. This is what is happening, and this makes possible that a lot of people are reading this without thinking of it as foolish, like it could have been some years ago.

This new vibration of the planet is what is making everyone nervous, depressed or sick, because to be able to receive more light and to rise to that vibrational level, people have to change physically as well as mentally, they have to change the way they think and feel, and delete or eradicate from their lives such beliefs or parameters that generally differ from reality or that take them towards the negative side of things.

You must put your warehouses in order, because each day you are receiving more light on your consciousness and even if you want to avoid it, you should start putting your hands on the project and start the cleaning or decide to live in the middle of the dirt.

This change creates physical discomforts, pains on the body, on the skeleton system and most of the time; the medical tests can’t find the reason or illness that provokes it. Generally they relate it with stress or nervous states; nothing farther from the truth, because these discomforts are provoked due to negative emotions accumulated during our lives, fears and anxieties that you have carried with you always and that now have the opportunity to transcend and transmute. It’s about that dust accumulated for years that you are now seeing, for it to be cleaned.

There will be nights when you will wake up and stay up for a few hours…don’t alter yourself, read a book, watch TV, meditate, don’t fight thinking there is something wrong with you, it’s the new vibration of the planet that you’re assimilating, you will go back to sleep and the next day you will not feel a need to sleep more. If you don’t flow with this process properly, the pains will be more intense and you will be diagnosed fibromyalgia, which is a name that medicine has given to these pains that have no visible cause and for which they offer no treatment with concrete results, they only give you a prescription for antidepressants and this makes you escape the opportunity to change your life.

One more time you chose which reality you want to live, only this time the drama will be more intense and of course will be the love. If the Light is increased, also is the lack of need for it, this explains why there is so much irrational violence during the last years.

We are living the best time that humanity has ever lived, we will be witnesses and actors of the biggest transformation of consciousness that you have ever imagined.