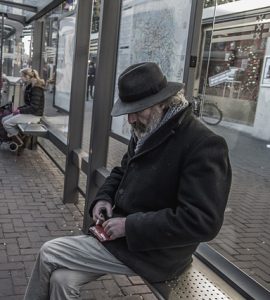 Going thru old files page by page looking for a legal doc that might be mis-filed, I’m reminded that my husband and father in law fell prey to many investment scams. Lee died in 96, Dad lived just 3 miles from me. I invited him to live with me after I stopped by one day after getting no answer. The rule was he would “call me each day to make sure I was ok.” He said he heard the phone ring but he was doing the daily mail so he didn’t answer.

Um, he’s 84, what kind of “daily mail” was he doing? I asked if I could help him and he had me sit at the dining table. It was covered with dozens of scam mail (this was 1999) solicitations and he spent much of each day filling them out and sending them in. That and attending “business lunches” which were those free restaurant meals for seniors who sit thru the investment opp presentation. The rest of every day was watching news and Jerry Springer, then more news. He came to live with me in 99. I asked if he could help me feed the squirrels each day.

Until she died a few years before, he’d visited his wife in the nursing home every day noon to 2pm. She had Alzheimers, she was nonresponsive but he sat with her 2 hours daily for 10+ years, reading the Bible to her. After she passed, I asked if he could help me feed the squirrels each day. He was 80, used to having a daily purpose. 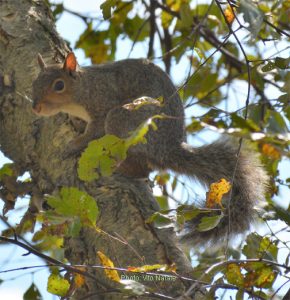 Every day, he got up to shower and shave and dress to leave the house at 11:45 as he’d been doing for 10+ years. He’d drive over to my place with a bag of peanuts and place them in the crooks of the lower branches of the big oak in the east garden and sit back to watch. They began waiting for him.

I’d take a break from work and come out and visit. He’d usually “have a dozen customers” each day at The Squirrel Park. He’d point out which was which, who was greedy and came back twice (Bob, named bcz of his tail) and how many blue jays were stealing the nuts first. He’d shoo them away with the cat fishing pole feather toy. A quiet and intensely reserved man, I loved seeing his delight at their antics.

He’d tell me how many peanuts each got and kept track of when to buy more. Almost daily he remarked he “might have to double their order.” Meanwhile, there are peanut plants growing up all along the front easement where they bury the ones they don’t eat.

When he moved in with me in 1999, I asked if he could check on them twice a day, so he scaled back their per-session dole. I smiled when he began “checking on them” right after breakfast instead of turning on the news. He’d still shower and shave and dress for the task. Then tv, a nap, then each late afternoon before dinner, he’d check on them again. I’d get to hear all about it at dinner and took joy in his delight. He passed in 2002. Not a day goes by I don’t think of him.