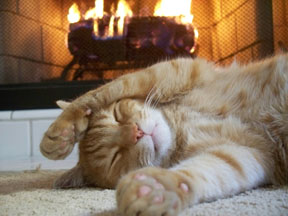 My favorite holidays are the ones where I don’t have to be anywhere.  Planning on a quiet Thanksgiving, it was the midnight before when I decided to clean the house.  I moved furniture around as I steam cleaned my floors.  I took a stool, 2 chairs and a small table to the shed. I disassembled YinYang’s “kitty city” which is a few sizes of cardboard boxes with doors and windows cut out, side by side in the living room. I moved the table out into the middle of the living room and set it for dinner.  Already the room looked larger and brighter.  I decided to chop vegetables in preparation for Thanksgiving dinner the next day, so I began with cleaning the kitchen and then washing all the cleaning cloths.

I began with cleaning out the refrigerator and wiping the shelves and bottles all down.  Then I peeled and chopped potatoes, then chopped onions, celery, carrots, shallots, fresh ginger, red peppers.  I decided to roast them ahead of time as well.  Into the oven at 425 for 20 minutes, they were drizzled with olive oil and sprinkled with fresh chopped thyme, basil, rosemary. Next I roasted mushrooms for the dressing and the gravy. Using the convection oven, I roasted the veggies two trays at a time.

I’m not a dessert eater but I do like a sweet element, so I made a semi-homemade cranberry orange apricot chutney.  Here’s the recipe:  Saute until golden one large onion and 1 chopped clove of garlic in 1 tbsp butter in a saucepan with a half cinnamon stick (or a few shakes.). Add I can whole berry cranberry sauce, drain one can of mandarin orange segments into a bowl. Put the orange segments into the sauce, and into the bowl of juice chop up a tbsp of fresh ginger and let it soak. Chop a dozen dried apricots and put them in the orange ginger juice with a tsp of apple cider vinegar. Add to the sauce and heat thru, the dried apricots will plump up in the juices.  It’s delish. Sauteed onions make it savory and roasted ginger and cayenne give it a bite.

By the time I went to bed about 2:00am, dinner was prepped for the next day and my house was spotless.  Ok, not the office, but that’s another story…  I felt productive and satisfied.

The next morning, I didn’t have to begin cooking until 10:00am for a noontime dinner.  I put the pre-cooked Publix turkey in the oven to heat and began to assemble the dressing.  To toasted bread crumbs I added roasted mushrooms, onion, celery, apple, diced dried apricot with fresh rosemary, sage and thyme.  Keeping it low fat, I used broth as a liquid and no butter, meat or oil.   I wanted to make it “flaky” for the man but wasn’t sure how to achieve that.  When I saw it turned out moist, I split the pan of dressing into a second pan and mixed some dried bread crumbs and put it back into the oven for another 30 minutes.  That helped but next time I’ll use less liquid.

I mashed the potatoes and put a dish of green beans with red peppers in the oven. I made the gravy, and heated the cranberry orange apricot chutney. It was a feast and still healthy and low fat.

Three good parts of Thanksgiving:
(1) waking up from the after supper doze off and not feeling bloated, having not overeaten.
(2) I’m glad I clean as I cook, so there aren’t a pile of dishes waiting for me.
(3) After so many years of mandated holiday dinners with family, I’m thrilled to keep it simple and quiet without the crowd.

Later than day, my tummy growled.  I first went in and weighed myself – yay, I can eat a little more turkey and dressing, even gravy.  Having slept all afternoon, I’m ready to party! And by party I mean nibble and go back to bed. Which is my favorite way to end a busy day.