I experienced an interesting exercise yesterday watching myself react to old triggers. A pal and I were driving when I spotted a former friend walking north on Emerson Drive. I knew who it was from a block away by the walk, by the clothes. As I passed him, he had a look that I recognized well. He looked completely luded out.  I did a U turn and passed him again. He was sitting under a tree in someone’s yard.  He looked straight toward me and I’ve seen that face enough to know it well. Bipolar, most who know him haven’t seen the down side, they see only the up moods, the faux charm, the manic “on” personality. I saw both for 2 years.  My first thought was he needs to not be walking around like that. My second thought was, “it’s not my job to know what he should be doing.” I went home and thought no more about it.  Later, as I was gardening in the front yard, I found myself glancing up the street and at my driveway. I began to feel uneasy. Back in the day he’d spook me by watching just out of sight. He holds grudges for years and plots payback. It doesn’t matter if there’s a monster in the bushes or if I only think there’s a monster in the bushes;  either way, for peace of mind I should get out of the bushes. I went inside and thought no more about it.  I woke at 3:00am and walked outside for a nighttime stroll around the hood.  As I neared the street, however, I felt uneasy.  I didn’t feel safe walking around in the dark. I wondered if my former friend had been by. For a year he lived across the street at his mom’s, who was my friend for 20 years. For that year I stopped walking at night. He now lives a mile south, so it’s still on his radar. He’d been out walking — when he hates to walk — and he was looking in a bad way. Not what I’d want to run into and certainly not alone in the middle of the night. He’s a troubled individual. I hope he gets the help he needs. And if I feel in danger, I need to look within and see what it is in me that is attracting those thoughts and what I can learn from it. And as always, I trust in God and tie my camel. 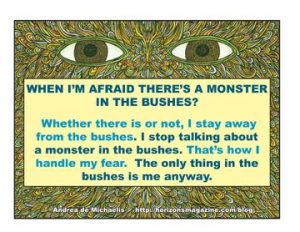