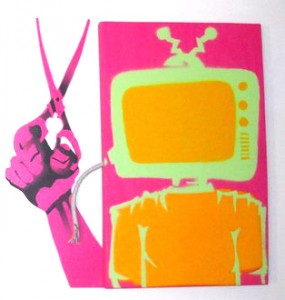 It took me having a tummy bug to decide it was time to disconnect from cable tv.  I had a 3 day bug last month with fever and chills and body purging. I hadn’t been that sick in years. Being helpless definitely puts your mind in a different place. Sickness doesn’t worry me as I’ve learned that as long as I’m eating relatively healthy food, anything I “catch” is going to move through my system quickly enough, and it does. For the most part I eat healthy and take plenty of vitamins and mineral supplements and have no deficiencies.  When I am sick or recovering, I find I heal best in a quiet, calm and pleasant space. I turned the tv on for distraction from the nausea and body motions, but found the sharp words and movements were too intense, even with the sound muted. It literally made me more aware of my discomfort and it made me feel worse. I switched over to my DIY and real estate shows and scrolled the channel guide looking for educational and nature programs. Then the harsh commercials got to me. Long story short, I went several days watching Netflix and Amazon Prime and, based on those days of down time, I made the decision to disconnect cable TV. As soon as I made the decision, I began to feel much better.

I DISCONNECTED MY LAND LINE ALSO
I also ported my 33 year old land line number to my cell phone. Now I can catch every call. If it goes to voice mail, I can read it right away in a text message. Make sure I have a text number or email address for you so I can respond even when I’m busy.

MY TV IS SMARTER THAN I AM
I love new technology! My smart tv connects me automatically via wifi to Netflix, Hulu, Amazon, Youtube, all the services. I’m just now – after disconnecting cable — discovering what bounty is available on Youtube. For instance, I am just learning that in addition to music, yoga, tai chi, zumba, instructional shows and video seminars, full episodes of many popular shows and programs can be found, many without commercials, like Anthony Bourdain’s Parts Unknown in Marseilles, France with Eric Ripert which I just watched. Initially it was cumbersome searching for titles using the tv remote, then I learned I could “pair” the tv with my iPad, which meant I can use the iPad keyboard find a show I wanted to watch, then go into Settings on the iPad and enter the code.

ONLY WHEN MY MIND CHATTER DIES DOWN CAN I HEAR YOU
It took me 3 days out of the office being sick for my mind chatter about work to die down. Only when my mind chatter dies down do I have the space for new thoughts to enter. Only then can I really understand obvious things that escaped me before. I wondered how many other things I am doing that are irrelevant for my lifestyle today. This is why I schedule thought time for important projects, because I keep so many irons in the fire. Having cable for so long was a perfect example of holding on to an old belief simply because it felt familiar and I was used to it. Whether it was good for me or relevant in my life right now or not.

OVERCOMING MY BRAIN CHEMISTRY’S ADDICTION TO THE RITUAL OF CABLE TV
It was interesting to observe my thought processes as I overcame my brain’s addiction to the ritual of cable tv. I reflected that I am used to sitting in front of the tv twice a day. That’s when I wind down from the day’s work by checking email and Facebook on my phone in the recliner. I have the cable listings guide running muted on the tv screen in the background. Occasionally I’ll look up and see a show that catches my eye and I’ll watch a few minutes of it, then I go back to Mute and scrolling on my phone. A big revelation was that it was not the SHOWS I was used to WATCHING on cable that were self-soothing, since I rarely watch anything for long. The familiar behavior that was self soothing was the ritual of scrolling for info, of READING the cable listings, seeing the FAMILIAR NAMES in FAMILIAR SEQUENCE twice a day as I sat to relax. These names and words scrolled silently on a beautiful blue background, kind of like a mantra running in the back of my mind, whether I was paying attention or not.

AT FIRST I USED THE CABLE GUIDE AS CALLER ID
That’s how the daily habit began. I kept the cable guide on the screen for so many years because (1) it was also my clock and caller id and (2) I liked knowing what the possibilities (shows) were, whether I chose to participate or not. As much as I like change, I can also be a creature of habit. I am soothed by repetitive words and ritual behaviors. Each evening I wind down by doing yoga then meditation. I have 6 minutes of silent prayers I say as I settle into posture and mindset to meditate. Those 6 minutes of repeated chants and mantras are familiar names to me. I say them in familiar sequence twice a day as I sit for meditation.

LETTING THE CABLE GUIDE TRANCE ME INTO AN ALPHA STATE
I thought, that was kind of how I had been using the cable guide. Twice a day I’d sit in silence watching the familiar names scroll in familiar sequence, as my thoughts settled down from work. It brought a sense of order to my day. It was the repetition of the familiar words that I found soothing. It wasn’t often that I was looking for any particular show. It was the act of reading something familiar that didn’t require much thought. Like a relaxation exercise, it soothed me into a pleasant alpha state

BETTER SLEEP IS A BONUS!
I’ve also slept longer and more soundly. As I observe the thoughts that come and go before me in meditation, I see clearly that by having the cable guide scroll in front of me, subconsciously the cells of my body are On Alert, since I am in Seeking mode. As though subconsciously I don’t want to go to bed because any minute now there might be a big giant choice of really cool stuff I want to watch, which I’ll miss if I go to bed. Disconnecting from cable made me more likely to go to bed.

I like learning new things about myself. Like how after not seeing the blue cable listing guide for several days and just now Googling to find an image to include, I got a dopamine rush like seeing an old lover! Our minds are powerful things! I use it as a reminder that the blue of sky can also give me the same rush.

ONCE I DISCONNECTED, EVERYTHING FELL INTO PLACE
Once I made the decision, everything fell quickly into place and the transition was a breeze.

THE CABLE TECH HAD A PARTING MESSAGE FOR ME
As a final parting gift from the cable company, when their tech arrived to pick up the phone modem and cable box, I got preached “the gospel as it is today, and learned about “Luciferians and that masonic symbolism on one side of the pyramid details what amounts to satanism.” He mentioned my No Soliciting sign outside and asked if I got many Jehovah Witnesses. Not since the sign went up, I told him I know that’s part of their “job” and they get scored on each encounter, so I admire letting their faith not waver despite obstacles.

He told me he used to be a Jehovah’s Witness, then he went to an Amway meeting and became born again and studied the Bible. This time he understood it. He has a high level of reading comprehension, he told me, but before being indwelled with the spirit of God he didn’t understand the Bible. Now he does and when he’s indwelled, he has all “9 gifts of the spirit.”

He asked what work I did and I told him I published Florida’s new age magazine the last 23 years. “New Age,” he asked?? “What’s that?” “Oh, basically allowing everyone their own path to God.” Then he segued into Nimrod and Luciferians and Tower of Babel, and told me about the “witchy satanic symbolism” on the pyramid so NOT ALL paths go to God. Like in Haiti, he told me, where they do spells, or the Science of Mind folks. Then he asked me what did I believe that was different than what he just said? A trick question since his statements were all over the place, but I didn’t hold the same belief on any topic he mentioned. I knew not to say that. I didn’t want to delay this man from his work any longer.

However, by now I’m not naive enough to think he’s NOT a messenger sent by God to make me aware of something, but I’m also on a deadline and just got over a flu. I told him that. I know it’s stressed out times that we’re at our lowest energy and most vulnerable which is clearly how I vibrated him into my experience. He felt he needed to have his say and that I needed to hear it, so I relaxed into it. It felt good for him to take all the loose disconnected cables with him. The house has miles less tangle now. I had no idea how entangled I was until I was free.