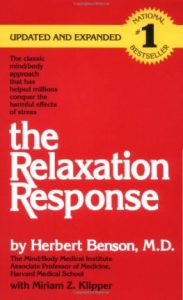 Did you know that the book by Herbert Benson The Relaxation Response gives the exact technique of  Transcendental Meditation, minus the ritual and religious overtones and using the word “One” as the mantra?  The  Transcendental Meditation, or TM, technique is a form of mantra meditation introduced worldwide in 1957 by Maharishi Mahesh Yogi, and popularized in 1968 by the Beatles, and the Beach Boys.

1.  Sit quietly in a comfortable position.

3.  Deeply relax all your muscles, beginning at your feet and progressing up to your face.  Keep them relaxed.

5.  Continue for 10 to 20 minutes.  You may open your eyes to check the time, but do not use an alarm. When you finish, sit quietly for several minutes, at first with your eyes closed and later with your eyes opened. Do not stand up for a few minutes.

6.  Do not worry about whether you are successful in achieving a deep level of relaxation.  Maintain a passive attitude and permit relaxation to occur at its own pace.  When distracting thoughts occur, try to ignore them by not dwelling upon them and return to repeating “one.”  With practice, the response should come with little effort.  Practice the technique once or twice daily, but not within two hours after any meal, since the digestive processes seem to interfere with the elicitation of the Relaxation Response.

* or any soothing, mellifluous sound, preferably with no meaning or association, to avoid stimulation of unnecessary thoughts.

I took TM in 1970.  There is no doubt that it changed my world.  There exists  a certain “Maharishi effect”  when 1% of persons in a community are practicing the TM technique. The “Maharishi effect” is considered by the TM practitioners “a stage of transition to a superior state of harmony and order in life, reported by a lower number of murders, crimes, violence, accidents, diseases and by the improvement of the economical conditions and of other sociological indexes”.

The scientists who discovered the effect gave it this name to praise Maharishi Mahesh Yogi, who had predicted 30 years before that “should a small amount of persons act in the Transcendental Meditation program, that would suffice to improve the life quality for the entire community”.  The official website for Transcendental Meditation (TM) Technique can be found here.

I believe the magic in the TM technique is the single minded focus and steady 20 minutes twice a day discipline.  I think I paid $750 back in 1970 and now understand it can be had for $1,500.  The magic is in the fact that if you single-minded focus on something for 20 minutes twice a day, you will transcend your ordinary state of consciousness and reach that state called meditation.  That is a transcendental meditation.  So the Maharishi well named his technique.

Try the technique using the steps above.
Let me know of your success.