Since the beginning of time, man has sought to converse with loved ones on the other side; death seems so final, for the humans left behind.  Grief is a natural emotion, but there is something you need to know: our departed loved ones do not grieve for us. In fact, now and then, they look in on us, and sometimes they even try to get a message through. They are curious, and want to see how we are faring; but they know that our earthly existence is only a brief moment in the scheme of eternity. 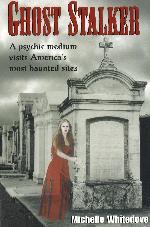 So, for those seeking to make contact with departed loved ones, I would encourage you to find a legitimate medium. Experienced mediums know how to protect themselves and most importantly, they know the difference between dark entities and spirits resonating love and good will. When you think about seeing a ghost, usually you think of it in a human form—perhaps ethereal, or transparent with a face, a body, and some type of clothing. But the fact is, a ghost is not usually seen as a person; instead, it is often seen as a white splotch, a streak of light, or a passing shadow.

One of the most common images is that of an orb, which is a ghost taking form as a floating, luminescent sphere. Orbs can vary, in size and color, and frequently show up in photographic images. An orb is the most common mode of travel for wayward spirits. Orbs are sometimes referred to as globules, which are similar to orbs, but more irregular in shape.

During our trip, I saw the ghosts primarily with my psychic ability: they appeared to me visually, but usually I was the only one who could see them. On several occasions, I pointed to an area and said to my companions, “Look, right there is a ghost!” We quickly snapped a photo, but what appeared in the picture was an orb of light—replacing the human-shaped ghost that I had seen psychically. Even if you can‛t see them, there are other indicators of ghostly or other paranormal activity in your vicinity.

A common way to recognize when a ghost is near is to feel the dramatic drop in temperature that occurs. Sometimes, it gets cold enough for you to see your own breath! 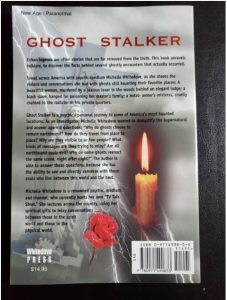 Paranormal activity almost always causes a flux in the energy: almost anything that runs on batteries or electrical currents will start to malfunction; the hands on the clock will spin; appliances and lights will flicker on and off; and compass dials will twirl in crazy circles.

Some ghosts can become more physically aggressive, but it takes an enormous amount of their energy to affect us in this way. Some of the more powerful ghosts and entities can actually accumulate enough energy to move objects, throw things, brush against you, or touch you by pulling, pushing or pinching. These more experienced ghosts are able to take form, and manifest for us to see, but a sighting is rare.

It is easier for most people to capture these ghostly energies on film or with video or audio equipment. Spirits show up as light globules, orbs, shadows, light streaks, or fog. Less often, people can capture details such as facial features, colors and items of clothing that are worn, or the reflections of translucent faces in mirrors. Perhaps the most interesting aspect about these energies that are captured on film, is that when the photographer takes the picture, he often does not see anything unusual. He took a photo of an object or a place because it interested him. When the film is de veloped, a paranormal image appears, which had not been previously seen with the human eye.

While on this ghost trip, we frequently had this type of experience. I had an advantage over the others because of my ability to see psychically.

Also, some ghosts exhibit discretion: they will make themselves appear in front of one person, but not another. If a group of people are in the same room, and a ghost appears, only one or two of them will probably see it. Just because people want to see a ghost, doesn‛t mean that they will. It is more common to collect photographic evidence than to witness a manifestation.

People make contact with ghosts through Ouija boards, séances, channels, mediums, meditation and dreams. I encourage everyone to pay close attention to their dreams, because this is a way in which everyone can connect to the other side. The dream state is a doorway to the spirit world, it is a way that Spirits can contact us, especially if we do not heed them in physical form.

Many people tell me that they dream of deceased loved ones; I then explain to them that the person was really there, speaking to them in these dreams. Dreamtime visitations are very common. But it is not necessary for you to wait for your loved ones to contact you. Obviously, as you can tell from the title of this book, people can, and do, successfully make these contacts on their own. And now, you are ready to begin the travelogue, and decide for yourselves whether or not you believe in ghosts.
### end of excerpt

Michelle Whitedove’s book Ghost Stalker is a psychic‛s personal journey to some of America‛s most haunted locations. As an investigator, Michelle Whitedove wanted to demystify the super natural and answer age-old questions: “Why do ghosts choose to remain earthbound? How do they travel from place to place? Why are they visible to so few people? What kinds of messages are they trying to relay? Are all earthbound souls evil? Why do some ghosts reenact the same scene, night after night?” The author is able to answer these questions, because she has the ability to see and directly converse with those souls who live between this world and the next. 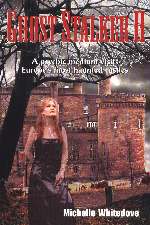 From first hand experience I can tell you that stalking ghosts with Michelle Whitedove is always an adventure. While touring America with her, we stayed at Myrtle’s Plantation situated deep in the bayous of Louisiana. This 1790‛s bed and breakfast is rightfully touted “America‛s most haunted home.”

On the last night of our stay we were up late doing a ghost vigil. At three in the morning Michelle spotted a ghost on the front lawn. She told one of the girls to film the area with her night vision camera. To the naked eye none of us non-psychic ghost enthusiasts could see the specter, but when the video was replayed, sure enough I witnessed my first ghost. A bright orb of light which looked to be the size of a tennis ball, was bouncing mid-air across the front lawn. After about three or four bounces, the light transformed into a glowing man walking with his arms swinging. He took a few steps, then returned to the form of the shining orb. We were all transfixed, watching the video over and over again.

The very thought of ghosts challenges us to rethink our perception of reality. And each of us must decide for ourselves.

Are hauntings merely a figment of an overactive imagination or are there invisible souls wandering this earth?

For me, my personal reality was changed forever when I saw the ghost captured on film. The unknown has fascinated, yet frightened us since the beginning of time.

And Michelle Whitedove‛s mission is to educate humanity on spiritual topics as well as the paranormal. Who better to educate us than a person with supernatural powers; someone who can see into the future and also look back in time? Information gleaned not from so-called history books, which are colored by the writer‛s political and personal views, but from a clairvoyant‛s vantage point.

Whitedove can look at history through truthful eyes, receiving psychic visions of real events, without bias. As a spirit-medium, she is gifted with the ability to converse with the unseen souls that inhabit the space right next to where you are sitting at this very moment. Her channeling abilities enable her to receive information directly from the source; whether it is a ghost, an angel, an entity, or the universal consciousness that opens for her like an end less encyclopedia of mystical knowledge.

Michelle is not limited to speaking to the dead but in this book it is her focus. I have heard Michelle lecture on many topics though the years. And some people wonder why anyone would research earth bound souls.

“You cannot deny the fact that darkness exists here on earth,” said Michelle Whitedove. An upbeat spiritual education, guardian angels, spirit guides, the soul’s evolution, positive thinking and the like are what most new age people prefer to deal with.

But Michelle refuses to only educate us on the feel good topics. She wants us all to realize the journey of the soul is multifaceted. There are many paths that a soul can follow. Throughout our trek to Europe‛s haunted and sacred sights, I was constantly amazed with Michelle‛s insights. Using her highly developed psychic abilities; she would receive information about a ghost or a location, and shortly after receive confirmation on her psychic accuracy. Ghost Stalker II was not written for the faint of heart.