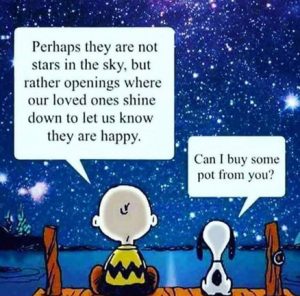 A friend mused under a starry sky just how many “stars” in her own life had gone out before her. She wondered what kind of place they were in and if they’d meet again. Then she worried how that would work with several exes who didn’t get along and children she was estranged from.

That didn’t sound like heaven, that sounded like hell. “I already have that now.” Then she worried how she could GO to hell if she’s already IN hell and I told her,

“If you focus on it enuff, you can talk yourself into anything.” She mused it might be a good time to start making peace with her past. She wanted them all to step up and admit their part and apologize to her and mean it.