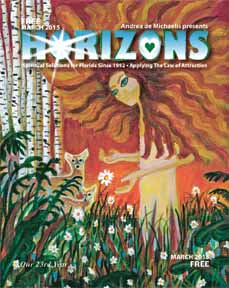 Hello and welcome to the March 2015 edition of Horizons Magazine. It was refreshing to have a little taste of winter, but Spring is definitely here! Along with the cooler weather came a giant head cold that made me low energy for 10 days. It’s a different kind of meditation when I’m taking meds for a headcold. The sounds in my head increase as I tune into the sinuses singing. As I breathe prana thru the nostrils, I feel detached, as if the giant thunderhead is not a part of me. When the nostrils clog up and I breathe thru my mouth, I feel my consciousness rise outside the body, observing its aches and pains without being too involved in it. Until the next breath. Times like this when my body gets knocked down a bit, I realize I live in my mind WAAAAAY more than I live in my body. Yay for being in control of my own thoughts.

A vision of Sai Baba and Amma in… IHOP?

I woke up hungry on Day 6, with an appetite for the first time since my head cold began. On the way to IHOP two miles away, I see a familiar figure, a somewhat scruffy looking gentleman in a wheelchair, heading east. I saw him last week in the parking lot at Publix near Wendy’s, eating under a tree next to the duck pond. Living near an I-95 exit, I see a lot of homeless in transit. I didn’t think more about it. I went inside and ordered breakfast: a spinach and mushroom omelet with no pancake batter, no cheese and no hollandaise sauce, dry rye toast. As I sat drinking my coffee, he came in and was seated at the table next to me. I got a good look at him. He appeared sun weathered, dirty and dusty from the road.

He asked the server for breakfast suggestions, telling her he didn’t eat pancakes or toast or fried potatoes. She suggested an omelet and I immediately thought, “if he’s sensitive to gluten, the omelet has pancake batter in it.” He opted for eggs with bacon and said “Waffle House gives me a side of tomatoes.” The young server seemed confused, so I called across and asked if she could simply substitute sliced tomatoes for his hash browns and toast. He said to her, “Yes, that’s what I want.”

He held up his hands and said “They are dirty from the wheelchair.” I asked if she could bring him a wet cloth for his hands and he said, “Yes, please, thank you.” I didn’t feel I was butting in. He had a hard time getting the words out and the server was young and seemed like she didn’t know what he really wanted.

When the server walked away, he turned to face me and suddenly the dirty, scruffy guy in the wheelchair was replaced by the form of Satya Sai Baba (Swami) who was smiling and laughing. The entire scene telescoped and it was just he and I. I feel a kundalini rush and was suddenly overcome with wanting to drop to his feet, knowing who He was. I mean, I was aware that I was having an internal vision as I was sitting in an IHOP, surrounded by people who had no idea what was happening. I also knew it didn’t matter if I dropped to my knees at his feet or not, He knew and I knew what was happening. I was overcome with Joy at the private interchange between us. I knew it would go on as long as I held my gaze upon Him. I knew from experience that as soon as I glanced away, the Moment would be gone. And it was.

I went back to my coffee as he went back to his. A moment later I hear what sounds like a fork dropping to a tile floor. I look up and see he’s got his fork (and there is carpet beneath us, not tile.) But now he’s turned into the form of Amma, Mata Amritanandamayi, The Hugging Saint.   Again, there is the telescoping of the entire scene into a pinpoint focus and it’s only Amma and I, and she is smiling and laughing. Again I am overcome with the urge to drop to my knees at Her feet and again I realize I am in the middle of the neighborhood IHOP and it would probably draw a lot of attention. The attention is irrevelant, I know this is all about ME and HIM/HER — God in whatever form.

I realize this is walking the razor’s edged path, living in both worlds at once. I knew it was irrelevant to Swami and to Amma whether I acknowledged Him/Her publicly. They knew what was in my heart. They knew that I knew that They knew. Again, I held the gaze as long as possible and then the Moment was once again gone.

I got up to leave and he half turned to the side and half looked up and again said Thank You. I touched his dirty hand with both of mine and said Thank You back. I paid his bill when I paid mine and asked the server not to tell him who had paid it.

Like a lover having had a glimpse of The Beloved, I didn’t wash my hand for hours, not wanting to break the spell.

It was refreshing to have the few weeks of winter this year, but Spring is definitely here — time to open the windows, shake out those rugs and clear any clutter from the last few months. For some, that includes recognizing and releasing personal baggage — my fave! My friend Celeste is having a problem with hemorrhoids.  I looked up the metaphysical cause, which said ” holding onto past angers and being afraid to let go of them.”  Celeste told me, “I don’t know how to release the past hurt and anger. My dad passed when I was 15. Two years later, I got a blood clot in my brain. I was the youngest and the only child left at home. My mom never liked me. At an early age, I just didn’t like her either. I had just run away from home and within a month I got the blood clot. Since I was on mom’s insurance, she was called. She was beyond livid. She felt somehow I purposely developed that blood clot just for the attention. She really never spoke to me again. Not that she spoke to me much, or kindly before that. I honestly don’t know how to get over it all. I have tried several ways. And I seem to keep reliving my childhood…I am in situations I perceive I am “stuck in and unloved.  I wish I knew how to release the past hurt and anger.”  I shared with Celeste a process that works for me for releasing hurt and overcoming grief. I felt great relief after I did the process for the first time.  As time went on and the hurt and grief arose again, I would repeat the process.  Here it is for you:

An effective process for releasing hurt and overcoming grief

Can you invite ____ into this scene with you, to share in the presence of God?

What emotion do you feel?

What degree of sadness/anger, whatever do you feel when you bring ____ into the scene with you? Where on your body do you feel it? (for me it was heart)

Can you describe what it looks like? (for me it looked like clasped fists, tangled ball of string)

Would you be willing to give that to God, to let God take that feeling away from you? (for me it was yes)

Do that now. (I imagined God up in the sky and me handing the red tangled ball to him)

What is that emotion now? (for me it was gone)

What emotion do you feel when you invite ____ into the scene with you now?

I’ve done this process with husbands, with exes, and friends who had passed.  Some I felt the hurt and grief released after one session.  Some I had to do the process 4-5 times before I felt it go.

Robert Burney, M.A. says, “We are attracted to people that feel familiar on an energetic level – which means (until we start clearing our emotional process) people that emotionally / vibrationally feel like our parents did when we were very little kids.  At a certain point in my process I realized that if I met a woman who felt like my soul mate, that the chances were pretty huge that she was one more unavailable woman that fit my pattern of being attracted to someone who would reinforce the message that I wasn’t good enough, that I was unlovable.   The way to stop reacting out of our inner children is to release the stored emotional energy from our childhoods by doing the grief work that will heal our wounds.  The only effective, long term way to clear our emotional process is to grieve the wounds which we suffered as children.  Until we start releasing the hurt, sadness, rage, shame, terror – the emotional grief energy – from our childhoods we will keep having dysfunctional relationships.”