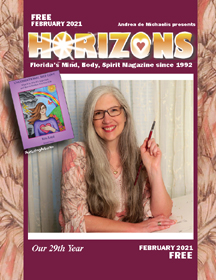 Hello and welcome to the February 2021 edition of Horizons Magazine.  Friends are glad for the new administration. For me the last 4 years went quickly. Once it was clear at the first press conference that he wasn’t telling the truth, I stopping listening. Period. I know friends in the military with kids who received benefit from his policies. It didn’t affect me either way. Covid 19 affected me and that was mishandled but otherwise, despite the horrors that I know otherwise occurred, I was unaffected as a result of the policies of the last 4 years.  Yes, some I knew had immigration fears but that wasn’t me personally.

I lost “friends” in the last 4 years, not due to difference of politics, but due to them becoming so rabidly mean and hateful on Facebook, name calling, mocking those they opposed.  But it’s not fun to be around folks like that anyway so it’s no real loss.  I’m all about keeping it real and keeping it fun.

The reality is the postings shared on social media during the January 6th insurgency at the Capitol by those instigating and participating in it, gave law enforcement plenty of intel to identify, arrest and charge. And folks, feeling betrayed by the one who told them to do it, now realize they got played and have real life criminal charge consequences for it.

Seeing they’re being held personally accountable, participants are talking left and right, turning in friends and family in hopes of making a deal to stay out of prison. The thing is THEY THOUGHT THEY WERE FOLLOWING A PLAN SOMEONE HAD THOUGHT OUT.  A lotta folks began learning they better study basic Constitutional law before believing what someone told them their rights were. Lotta folks learning they need to fact check before they post something, they need to find articles from credible and unbiased sources and stop passing on every inflammatory headline that fuels their discontent.

They just don’t think these things thru. The wacky stuff some folks have been fed to believe? Sure, if you accept a premise — no matter how fanciful and non-evidential — you can make the logic follow. That’s why you don’t accept every premise someone offers you. You don’t accept as true everything anyone says to you. The first question I ask is, “whose agenda does this info serve? Who gets lauded or dethroned, who makes $$ from the results? What is the consequence of the statement being true? What is the consequence of the statement being false? Who gets hurt?

Thinking stuff thru will definitely bring you a happier life. Know WHY you think as you do.

Sometimes it’s just upbringing, brought up in a small circle where everyone thought the same. You thought that was how it was supposed to be. It was all you knew.

Sometimes it’s a new idea someone discovers and it sounds exciting to join in.

Just keep your eyes open. REALIZE what you’re being programmed by and for.

I’ve been programmed to think every hopeful word I can give, every hopeful  reframe of an unfortunate incident or memory benefits at least one other person, someone I may never know about.