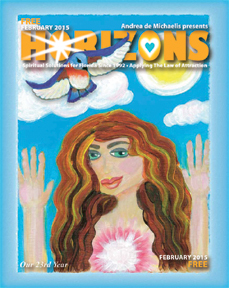 Hello and welcome to the February 2015 edition of Horizons Magazine. This month, JP Sears gives tips on Living Beyond Emotional Triggers, and Karen Williams shows how to use the thought of what you don’t want as a trigger to change the energy of the circumstance. Michelle Whitedove shows how to use goal setting to assist in law of attraction and Leo Babauta suggests simplifying, cutting down and imposing limits. Different strokes for different folks, huh? Doreen Virtue discusses dreamtime with the angels, and Sonia Choquette shares her favorite traditions that keep her connected to Spirit through daily practice. Sonia Choquette really speaks to me. I’ve read all of her books and seen her numerous times. I admit my own life is a series of routines and rituals. It’s not due to superstition, it’s just that over the years I’ve developed daily practices that help keep me centered and set the tone for my day. Here are some things I do to connect to Spirit each day:

I wake up early and do my morning puja, my morning spiritual routine. I fill a glass of water and set on the altar as an offering, as prasad, to drink afterwards. I light a candle and incense, I say a series of prayers as I stretch into my morning yoga. Doing this creates the mind space for me to settle into meditation time. I know meditation is done once I feel I’ve settled into the Presence and made contact. On some days, I don’t feel I’ve made contact. I just sit, breathe and release thoughts for my sitting time anyway. I’m always connected. Whether I feel it or not depends on my focus. I drink the glass of water, taking the prayers into my body. As I enter my office, I light a candle and say a prayer for the clients, callers and advertisers, sending a blessing for their success. Using incense, I smudge the office doorways, the phones, the computer, the in box, the out box and the mail tray. I pray that whatever comes in and goes out is blessed by Spirit, uplifted and healed. Including me.   After work, I stretch into yoga to unkink. I prepare my evening meal with Love, as though I was preparing it for the Beloved. I eat it with a prayer of gratitude. Later, I’ll do an evening review: I sit quietly either before the meditation altar or at the firepit and in my mind I go over my day. Is there anything I’d like to amp up via creative visualization and vibe with for a few moments? I do that. Is there anything to forgive? I do that. If there was anything I’d have done differently, I take note of that. I end with a prayer of gratitude for another day of life on this wonderful planet. Those are things I do to invite Spirit into my life each day.

Were you stretched in 2014? Were you pushed beyond your comfort zone? If so, thank the Universe for that blessing. You’re stronger now that you’ve snapped back. Exercising that muscle made you more powerful than you were. What are you going to do with this power in 2015? What’s next?

Two friends are having a falling out. One has lived in the other’s home rent free for a year. They no longer have fun sharing space. Both want to be free of the situation. Both have posted snarky comments on Facebook about the other. They’ve gotten wrapped up in the drama playing out to their Facebook friends and began to lose sight of what they really want. Both understand metaphysical principles, yet in the heat of the moment it’s easy to forget what we know.

It happens. That’s an ongoing part of the spiritual path: we have a revelation, we understand, we forget, then we get the same lesson over and over until we remember again. That’s why it’s called the Path of Return.

So, instead of having a discussion with each other and setting boundaries, each for awhile chose to act at home as though nothing was awry, while smack-talking the other on Facebook.   I recognized what was happening when I saw the news feed. Each contacted me after I’d commented on their post.

I reminded them of what they really wanted, to be free of the other with a new living situation. The process to do that was:

(1) intentionally finding something else to focus on.

(2) Stop focusing on what the other was doing and saying.

(3) Take steps to move forward on their own, without waiting for the other to take steps.

For one, that meant finding a new home. For the other, it meant readying their home with fresh energy: clearing new space and organizing storage. For both, it meant recognizing they were misguided in their perceptions.

When friends have disagreements and are hurting, miscommunication happens. I’ve learned if I write out what I want from the other, there is much less misunderstanding. I suggested the landlord leave a note telling the tenant exactly what she required of her.

Long story short, what the tenant read was not what the landlord wrote. Angry eyes read words that are not there. She wasn’t doing it on purpose out of hate. It was a natural reaction to someone seeing no other way out and not eager for change. Even so, when tempers are hot, my experience is it’s a good idea to write, to email rather than talk. If a civil conversation can’t be had without one blowing up, emailing your side of the story can clarify a situation.

After the note, they spoke and a lot of the tension dissipated. A dialogue has been opened. When you find yourself in a situation like this, ask for the grace to open your heart, your eyes and your mind to see a way out of the tension. All things are possible.

I bought myself a few big gifts in 2014: a new steam mop, new stove, new dishwasher. I’m not a big spender. I buy what I need when I need it but my timing could be better. I was down to one burner and no oven before I thought I needed another stove. Only the last few years have I cooked enough to justify having a dishwasher again. I gave mine away 20 years ago. Now I look forward to more convenience, and more counter space.

The older I get, the less clutter I want around me. I like to see into all the corners and edges where the floor meets the wall in each room. It gives me a sense of spaciousness, whereas when I look at clutter, I feel a little contracted and confined. I like having space between my molecules. I don’t like to feel bound or tethered. Even in my stocked storage shed, I can see behind the stacked furniture and walk between the boxes.

I like knowing what I have. That lets me know when it’s time to get rid of something. I don’t like to keep things around unless there’s a reason and they serve a purpose. Either they are in use, or I have a vision for their future use, or they’re given away. Keeping my “stuff” manageable helps keep my life manageable.

And if there is any conflict going on, I can be sure that the act of clearing out clutter and reorganizing new space will also be what triggers me to find resolution in the conflict. it never not works.