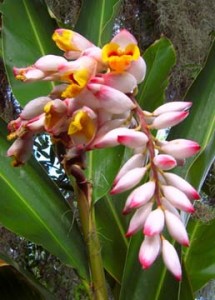 I have shell ginger (Alpinia zerumbet) in my yard. It began on a sunny side of a fence and quickly migrated under the fence to really begin growing and blooming in the high, dappled shape. My shell ginger has no fragrance that I can detect, the flowers nor the leaves. I’ve reaed online that the rhizome is not edible but the leaves are used in folk medicines and the dried leaves and stems can be crumbled to make potpourri. Also known as light galanga, pink porcelain lily, shell flower, shell ginger, variegated ginger, butterfly ginger, yàn shanjiang in Chinese, getto in Japanese, and Sannin in the local dialect of Okinawa, the leaves and the extracted oils of the plant have long been used in Asia to relieve fevers and malaria, as well as to serve as a general health tonic. It is also used in South and Central America as a diuretic, antihypertensive, and antiulcerogenic. Now, modern research has confirmed hypotensive and antioxidant activity in the leaves and rhizomes and extracts of the plant.  From http://naturalsociety.com/alpinia-zerumbet-shell-ginger-medicinal-plant/#ixzz3fJN0gEyc