October 10, 2015: Happy Mercury Goes Direct Day! Everyone who gets nervous each time Mercury goes retrograde can relax for while. After tomorrow,  Mercury retrograde ends and Mercury goes direct again.  That means enough of the drama and mis-communication of the last few weeks.  After  Mercury goes retrograde is the time to slow down to notice changes you’d like to make, but you’ll wait to correct them after Mercury has gone direct.  During the retrograde, your time is best spent looking back in review – not looking forward.  Mercury direct, however, is the time for new beginnings, setting the record straight, for making plans and commitments.  It’s the time for clearing up any disputes you’ve had the past few weeks.  It’s time for getting everything out in the open and making plans for the future.  It’s a time to take steps toward financial self-sufficiency and to deal realistically with your debt. 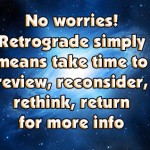 Astrologers say do not apply for a loan during Mercury retrograde, or interview for a new job.  Do not take a first date seriously. Do not begin a new partnership.  Hold off on romance.  Mates from the past may reappear, or perhaps just past relationship baggage will cloud your thought processes – and the new relationship. Retrograde isn’t the time to break up or otherwise decide on a new direction in relationships. If you have to have “the talk,” hold off until Mercury goes direct.   Even if things have taken a turn for the worst, when Mercury goes direct, you could pick up where you left off.  That can be the good news and the bad news. Either way, it gives you the chance to make a clean break and smooth over the messy outburst neither of you intended 3 weeks ago. A retrograde is not the time to set a date or finalize any important plans, as they’ll likely end up needing redoing.  If you enter into contracts, make sure you read the fine print. This will save you much time and money later.

Things will begin to straighten out as Mercury passes the point where it first turned retrograde, and you can pick back up where you left off before it went retrograde. Save the contract signing, the break up or engagement plans until after that, and this is also the time to repair any mis-takes of the retrograde period.

How totally cool that even the planets give us do-overs.

Retrogrades as a Metaphor for Consciousness Evolution:
Astrologer Martin Schulman, author of the Karmic Astrology series, writes in Retrogrades and Reincarnation, “More often than not, planets appear in retrograde motion when they are in opposition to the sun.  Thus, they often symbolize a vortex in consciousness which might be called the not-Sun of reality.  The reader is cautioned not to attempt to experience the retrograde vibration on intuitive or psychic levels because the effect of so many retrograde placements can easily put an individual out of harmony with his own vibration.  It is therefore suggested that, except for your own chart, this information be read with enough personal detachment so that you are not pulled into the full vortex of the retrograde vibration.”