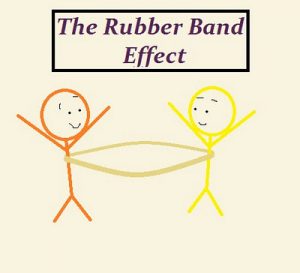 This is an excerpt from an email reading. A friend writes, “I met a nice guy, we’ve been out 6 times in the last month. He never checks his phone when we’re together, so I know he compartmentalizes his time. He went on a scheduled trip for a family reunion last week and I’ve not heard from him since. I sent a text saying let me know when you get there. What is up with his silences? How do I draw him closer – and how do I work with my own stressors to not project that onto him.”

Andrea responds: It’s just the old ebb and flow, the rubber band effect of the new encounter. Detach for a few days and it will resume. You may not hear from him this weekend so stay mobile. I don’t feel a giant connection with him just yet but he’s not gone. When I “feel” the connection, I’m feeling the emotional attachment. He doesn’t attach easily or well but he’s not being aloof, he’s just slow to make his way because he’s learned the lesson of getting too close too soon. He knows the infatuation period is where much talk and defining can ruin what might become.  When a guy starts to back away, you should do the same. Not as a game of cat and mouse but to restore balance and desire in a relationship by reading the signs that he needs time and space to integrate.

I feel you have a good assessment of him. Compartmentalizing his life is how he stays focused and productive. When he’s with you, he’s WITH you. When he’s at work, he’s at WORK. When he attends friend and family obligations, he’s THERE. He’s used to throwing dollars at loved ones, they see him as the fix it guy. He knows he can make a bigger difference in empowering them to be self sufficient by seeing them, talking to them instead of just mailing a check, so he meets with them regularly. When people feel attended to, when they know someone cares enough to give them attention, they feel loved and protected and secure and empowered. That’s what he brings to the table. It would be a waste of time for him to attend the family reunion yet text other people the entire time, or talk to them about his job or his new girlfriend. He keeps the topic to what they want and what they are all there for. He’s not one to “be there in body only.” His mind is in the gig as well. He’s “in character” in “the movie” and that takes discipline. And he’s got that.

When he’s with you, the best way to communicate with him not feeling emotionally overloaded (due to family etc stuff) is to keep to topics of current events and what you think of them, unless he chooses to ask about family growing up or particular past events or future plans. Let him lead the conversation to personal stuff. Right now he’s soothed by light romance and engaging conversation. Any further emotional responsibility feels burdensome to him right now. He has many financial obligations but he feels on top of them. He’s not telling you everything but he’s also not hiding anything. He’s got a lot going on. There are no red flags.

Basically right now he’s got a lot of balls in the air and only so much time. Sit tight, you’re still in rotation, at least in his mind. I’d not text or call, just do other things with enough focus that you have fun and forget he hasn’t called yet. Mentally chalk it off to, “he’s busy, I’ll let him get back to me, so what if it’s 2 weeks, we’re both busy and I understand.”

After a week long family reunion with people who see you as a money source, you’d need some silent after time as well.

Here’s a short visualization exercise, an emotional feeling workshop, to get you vibing in the place you want to vibe to attract what you want to attract.

An effective technique is to keep in mind all the things you like about him, just remove his face and name from the equation. Every man you pass, consider what you might like about him. As you consider that, keep in mind that the reason you are doing this exercise is reach vibrational resonance and hold it there long enough to begin the attraction process. Just a few minutes a few times a day is all you need to do.

We always attract into our experience someone who resonates vibrationally with where we are, so we need to make sure we’re where we want to be. We want to be honest, we want to be kind, we want to be self sufficient, we want to be motivated by a passion, we want friends who inspire us to a shared purpose, we want to make a difference, we want to harm none. Whatever we’re successfully aspiring to is what will come back to us, Make sure it’s the good stuff.

So keep in mind all the things you like about him, just remove his face and name from the equation. Every man you pass, consider what you might like about him. This exercise brings you in vibrational resonance long enough to begin the attraction process. Just a few minutes a few times a day is all you need.

And of course the old stand by, do a lovemaking visualization, a short mental workshop designed to attract a lover. Imagine circumstances and emotions until you feel engaged long enough for endorphins to flow. But if you’re not also doing “emotional feeling” workshops about intellectual conversation or shared goals, you’ll simply attract potential lovers with whom you may have nothing mentally or morally in common.

Question: I don’t know what you’re referring to when you say the ‘emotional feeling’ workshops.

I mean the visualization I gave above, making sure to include the appreciation of intellectual conversation, shared goals, etc (not just sex.)  Basically it’s just visualizing what you want to happen but visualizing it long enough that you can actually emotionally feel that it is happening. Because visualizing isn’t just seeing the picture, visualizing has to do with recreating the emotion and practicing the emotion you want to feel with the new person. You practice seeing yourself doing the activities you would do with those persons and you practice the emotion you would be having while you were doing the activities in real life with this person.

If you’re doing the visualization, if you’re doing the exercise of seeing each man who crosses your path (even in scenes on tv) as “what if him?” then you will begin dropping resistance. When you’ve dropped resistance, you will either attract someone else or you will attract a call out of this one.

Only if you still have resistance will you remember he’s gone and long for his call.

Each time you feel the longing, remind yourself that it’s nice to care about someone and want their call. You and he got along well and you would love to attract someone with his good qualities, someone who is also seeking someone like you and someone emotionally available, with time for a relationship.  These are thoughts to help you maneuver successfully away from the feeling of longing as in lack, toward a feeling of expectation for what is on the way.

The only time it’s delayed is when you get caught in the self talk loop of “why did he stop calling? what’s wrong with me? what went wrong?” that kind of stuff. Your self talk motivates you, so make sure you do it On Purpose.

Right now he’s spending as much time as he has for you and when you are apart, he’s just involved in other things. He feels a connection to you that he wants to explore but, again, time.

As you do the attraction technique above, you may begin attracting a closer connection with him or it may be someone new altogether. Either way you win. I feel you’re very much in his mind but he is used to the rubber band of emotions in a new infatuation so he allows cooling off time.

To end, I pulled this for you from https://lukespencer954.wordpress.com/2013/03/03/rubber-band-effect/ which explains The Rubber Band Effect