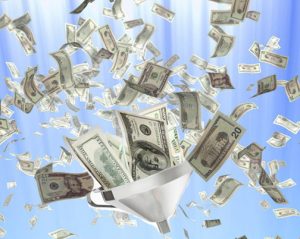 I talked to someone new last night who was unfamiliar with the concept of using creative visualization to attract something into her life. She has a happy enough life but like most of us would love more money. As I listened to her questions and concerns, I realized hers was not a matter of having resistance due to paying attention to troubling things in other parts of her life. She had always just made $2,000 per month and she never really thought about making any more than that.  Essentially she set her sights too low. She knew she would make $2,000 a month easily but then when the economy changed, that wasn’t really enough. She has no investments and lives paycheck to paycheck, however $2,000 month lets her squeak by.

All we had to do was expand her expectation and belief of what could be possible for her regarding dollars coming in. Like many of us, she erroneously thought that her income had to be solely dependent upon her skills and the whim of what her employer wanted to pay. I introduced her to the idea of God or the Universe, whatever you want to call it, being her invisible supply and everything being funneled through her expectation and belief about that being possible.

It doesn’t matter if you think you have no other skill or other income coming to you, you don’t have a rich relative to leave you money, you don’t have a college degree, you don’t have Investments. None of that matters. God is your supply. What matters is that you have reasonable expectation and belief that dollars can come to you from out of thin air, from some place you could never expect and just show up in a check in your mailbox in your name.

To ease yourself into this expectation and belief, you just practice some dollars visualization for a very few moments several times a day. Remind yourself that dollars can come to you from all corners of the universe that the Universe can delight you by an unexpected windfall of dollars. Imagine what it would feel like if that happened, feel the sense of giddiness and delight bubbling up inside your chest kind of like when you fall in love or win the lottery. Get that feeling going as you’re imagining dollars flying into your bank account. God is your supply and gets a kick out of giving you what you ask for.

We did a little visualization of all the dollars in the world circling around the globe just flying around in the air, because there are lots of dollars out there. Then we did a little visualization, meaning we imagined in our mind’s eye, a large silver funnel over her physical bank location. We imagined all the dollars flying around in the sky and a whole lot of them being funneled down into her bank account. She giggled when I said that which was a good sign because it showed she had no resistance to it.

RELATED: Here’s a link to what I’ve written about the Creative viz process