Andrea de Michaelis is a writer, speaker, visionary and publisher of Horizons Magazine, Florida’s mind/body/spirit magazine. Andrea writes:  I became a student of meditation and yoga philosophy shortly after graduating from high school in Hialeah, Florida, where I grew up just blocks from the world famous Flamingo Race Track. During the 1970’s, I explored various philosophies, eastern and western, and began what would be a 22 year career as a paralegal. While a corporate setting in the 70’s may have seemed unlikely to foster deeper contemplation of life, much less spiritual growth, it drew me into the deep, private pains of divorce clients and criminal defendants, all of whom were, in one way or another, passionately asking, “why me?” Why, indeed?

In 1976, my dad introduced me to astrology, and I soon discovered that my life and career to date had followed all of the strong influences indicated in my birth chart. I spent the next few years playing with astrology in my free time, while reviving a childhood delight in sketching and painting. I would gather the birthdates of the law firm clients and do their astrological chart, and match up their characteristics with their planetary placements. I would use the date of the crime or breakup, and see what planets would have been affecting them and in what area of their life it would show up.

As I studied astrology as it correlated to people and events I knew about in my daily life, I found myself becoming very intuitive and I was drawn to study tarot and other forms of divination. I began to see, through the archetypes portrayed in the cards, the common threads that run through life. I could see that my boss was The Emperor and, understanding the archetype of The Emperor, I knew how best to relate to him for maximum communication and production. I could see that my Mom was the Queen of Cups , so I tried to avoid tipping her over and spilling her.

The late 70’s and 80’s were spent experimenting with divination and astrology, coming to an understanding of archetypes, and trying to assess the karmic implications of various friends, as well as the law firm’s divorce clients and criminal defendants with whom I interacted daily. I worked with notable attorneys in Miami on high profile cases, and found the work very exciting and rewarding. I studied Eastern philosophy and even got involved with a cult or two.  I gained invaluable experience, I was glad to be in and glad to be out.  I took Transcendental Meditation, yoga, est, the Dale Carnegie course, primal scream therapy, Gestalt Therapy, Transactional Analysis, rebirthing, Neuro Linguistic Programming, Silva Mind Control, Biomagnetics, Therapeutic Touch and began teaching meditation and psychic development.

By 1982, my parents had divorced and my mom moved to Tampa and my dad to Key Largo. In 1983, I moved to Melbourne, Florida, 3 hours north of my childhood home. My Uncle Jimmy built me a house in a little patch of woods just north of Indian River County, and I settled into a comfortable job with the biggest law firm in town, and spent my spare time studying and writing.  I’d contemplated leaving the legal field but hadn’t given much thought as to what I’d prefer doing. I loved my work and was just seeking more time to myself. In 1987, my father committed suicide after an extended illness. It felt like the end of an era, yet the beginning of a new one. One in which a door opened, where I only expected a window.

Within a few years, I’d left the legal field, and my Mom suggested I apply to the Psychic Friends Network and work their phone line since I was an accurate reader. I was hired at the initial interview. I worked for Psychic Friends Network at night and that left my days free, so I began spending time at two local new age bookstores. I began offering tarot card readings a few days a week and teaching popular weekly tarot classes, psychic development, and teaching about the human energy field.

In 1991 I met Theresa Richardson and Kristy (Scott) Swaim Souto , who were also on the path and interested in meditation and metaphysics. Theresa was a popular local educator and was the impetus, along with local astrologer Leslie Marlar, behind several local metaphysical discovery groups and classes being initiated in central Florida. When Theresa and Kristy and I met, it was a dynamic exchange from the start. When you meet friends with similar interests and curiosities, you can work magic together, and we all felt it. Within a year, Horizons Magazine was born.

The three of us worked on Horizons Magazine around the clock, while holding down “real” jobs full time as well. At night, the 3 of us would be at the dining room table, while spouses were calling on the phone telling us to call it a night and come home. Clearly it was a labor of love. The magazine barely paid for itself the first couple of years, and that took its toll on the partnership. Theresa and Kristy were each raising young sons and experiencing lots of changes in their lives, and I worked from home for the Psychic Friends Network, and had plenty of time to devote to the magazine. By 1996, I began doing the magazine on my own.

In 1996, my mother and husband died, and I spent 8 months in John Steinbeck’s Salinas, near the Carmel/Monterey area of California. Being away from everything familiar was very healing and I did much writing while I was there, inspired by new sights and the possibility of new adventures. My living room window overlooked Mt. Fremont, and 4-5 times a week I’d drive the 45 minutes to Mt. Fremont and sit overlooking the Monterey Bay, meditating, reading and writing. I began several writing projects and became acquainted with several popular authors in the personal growth field.

I’d often dreamed of becoming an author.  Meeting these people and getting to know them let me see that their life was more about book tours and book promotion than it was about writing and teaching. Although I understood the need for this, it helped me decide that was not the kind of life I wanted.  It did however introduce me to the world of professional consulting and ghostwriting, and I entered into several collaborations and close friendships that remain to this day.

By the time I returned from California, I had developed a large client base and stopped working for Psychic Friends Network. I spent a year after my return to Florida settling back in, and was surprised to find that all the projects I’d been reluctant to leave in the middle of, no longer held interest for me and had, in fact, been just a lot of busy work I’d created for myself, as so often happens when we’re in a rut.  This thankfully freed up a lot of time to spend on new projects.

The year I returned from California, I bought a retreat home in the midst of 40 acres of hardwood forest in Murphy, North Carolina.  For ten days each month for the next several years I spent time there, silently communing and becoming familiar with the nature spirit of the land.  I focused on doing Horizons Magazine, and continued my consulting and ghostwriting practice as a source of income and personal development.

I currently publish Horizons Magazine, teach about the human energy field and interaction with nonphysical energy. I instruct in law of attraction, kundalini management, meditation, psychic development and mediumship, divination, reaching creative potential and peak performance and spiritual marketing. I am an intutitive astrologer, with a focus on uncovering your soul’s mission in this lifetime, and your soul purpose in relationship with others via birthdate compatability charts.  I am a graduate of The Monroe Institute Gateway Voyage program and have completed Pranic Healing levels I and II with Master Stephen Co.  I have completed Reiki I and II, I am a certified professional hypnotist, paranormal consultant, voiceover talent, ghostwriter and editor.  I live with my extended family in a small wooded sanctuary just north of Indian River County, FL.

In 2003, I was reunited with my very psychic brother Jerry, whom I had not seen for 37 years.  I had been told by our very troubled and misled father that Jerry died in the Vietnam War; however it turns out he had only been “banished” for defying authority.  The story is an interesting and intriguing one.

Both Jerry and I are interested in personal growth, exploring consciousness and helping others develop their psychic skills. Jerry is particularly involved in remote viewing.

For more info, see my blog at http://horizonsmagazine.com/blog/ and the links to Andrea’s Articles where I chronicle my monthly happenings from 1996 to present.  I have learned that whatever I am going through is likely what everyone else is going through also.  I love to read about the spiritual journeys of other seekers on the Path.  If you do also, you will enjoy the article archives.

You can see I’m not a great writer. I’m just a regular gal who’s been blessed with the time and resources to do some interesting things and I like sharing my stories.  I’ve found out a lot of what works and what doesn’t and gotten some profound insights along the way.  If I can save someone time and money, or heartache and frustration, by telling my story, that’s what I live for.

I just know my life has been a series of continual upgrades since I began my journey of spiritual awakening and personal growth, and I want everyone to have free access to what I know.  I want everyone to know that anything is possible and anyone can do it.  I want everyone to know that the life they are living now is just a fragment of what it can be, if they want more.  And that you don’t have to shell out hundreds of dollars for workshops and books and crystals and windchimes and training and certification for ascension and acceleration and internet products in order to reach a higher potential *smile*

I would just like you to know you are capable of far more than you ever dreamed and there is an internal compass that guides you in every moment by the emotions you are feeling in response to the thoughts you are thinking.  You have more choices available right now than you ever thought possible.

Questions?  Comments?  Email me at Horizonsmagazine@gmail.com
I’d love to hear your thoughts. 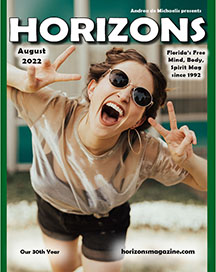