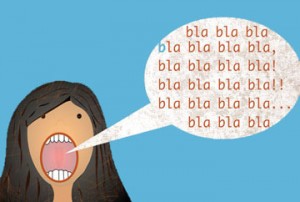 I had lunch with a friend today who remarked the only time she has a good experience in a restaurant is when she is with me. Then during the entire meal, even though the food was delicious and the service impeccable, all she kept talking about was how much she hates poor service and always gets it. Often she is the only one in her group who gets her order mixed up. She also didn’t like that the table next to us was speaking (very softly) another language. I hadn’t even noticed. I had to smile at the entire situation. She really has no idea that she keeps attracting stuff to complain about because she’s always on a mission to find something wrong with where she is and who she’s with. I’ve pointed it out to her. She thinks she’s just having a conversation and making observations. Her observations are right, according to her. I told her it’s not a right or wrong thang, it’s a perception thang. It’s a matter of how you look at something. And how you look at something determines what you can expect to attract out of it. I step into a restaurant expecting a good experience, whether it’s a $3 cup of tea or a $26 sushi boat. She steps into a restaurant expecting them to mix up her (always unnecessarily complicated) order. Even while scanning the menu, she begrudges the tip she’ll be expected to leave. And the thing is, even though we had a great lunch in a stellar atmosphere, she and I had different experiences. I watched the chefs make sushi and watched the fish in the aquarium dodge around each other, playing peekaboo with us. She continued deep into her story. I surrendered into not trying to make anything be any different than it was, just to find some good stuff in the present moment and groove on that.