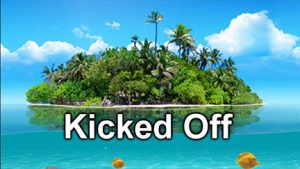 I got kicked off Hateful Racist Island

Yesterday I got kicked off a Facebook page of people who live around me for pointing out to them that their remarks were mean spirited, racist and inciting vigilantism. They call it a “crime watch page” since some listen to police scanners and report their version of what they hear. In the couple of months I was in the group, I read their hateful, racist comments inciting each other into action against their target du jour.  Some even drive around seeing what they can get into.  It gave me insight into the mindset of fearful and narrow minded, gun-toting neighbors — bullies many of them — ready to jump to conclusions, take one ticked off person’s story as true, and gang up against a target. I first posted correcting them as to landlord/tenant law then got attacked on the page as well as in several private messages.  I haven’t been bullied since middle school. For the first time in years, there were suddenly several people the next 3 days soliciting at my door — despite my No Soliciting sign. They only came here, not to my neighbors. It may or may not be related. Some post that the Black Lives Matter movement encourages cop killing, and then they savagely attack (in comments) anyone who cites evidence to the contrary. Meanwhile, none of the blacks I know encourage violence and none of the law enforcement I know target blacks.

But I get it. If you have limited life experience and all you’d been told your whole life was that non-whites would hunt you down to attack and kill you and rape your mother and children, you’d grow up afraid of them, and wanting to get them before they got you, right? Racism isn’t something that happened overnight. But folks don’t know what they have never been taught and bullies don’t recognize themselves as bullies. When there was a remark about the truck driven into a crowd of people, no one recognized themself as being part of the problem. Peter McGunn said it perfectly: “White people bragging about how they’d run over Black Lives Matter protestors blocking highways just yesterday are now wondering what kind of monster would drive a truck into a crowd full of people.“ I didn’t think they realized what they were doing so I pointed it out. I immediately got attacked by the group kingpins and kicked off the island.

Words are powerful. If you constantly post hate, you’re inciting hate.  If your posts are meant to encourage, give hope and comfort fears, you’ll encourage understanding.  It’s your choice — do YOU want to stay on YOUR island?

UPDATE: As soon as I dropped out of the vibe of the group, I attracted an apology from one of lambasters, One on one he was a considerate, thoughtful guy concerned for the world his children would grow up in. But in that group setting , he was one of “them.”  Funny how that works, huh?

RELATED: Don’t believe the misinformation
You can find heaven in the midst of hell
You wonder how it happens?
Flag seller riled up community instead of following protocol
Start being kind and see how your life improves
Break The Cycle: Racists only know what they were taught
When we hate, we give someone else the power
Benny didn’t grow up thinking Mouse Lives Matter
When we believe all lives matter, we’ll start acting like it
True Americans celebrate racial, cultural and religious diversity
Honoring the angels you find in front of you
Why the helicopters? What’s that boom in Palm Bay, FL?