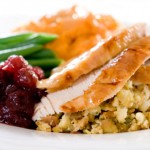 I’m having turkey this Thanksgiving. I don’t always. I enjoy the ritual cooking of it but not the preparing of a whole bird. Turkey breast alone isn’t an option as I prefer dark meat. This year for the first time, I ordered a small turkey from Publix that I picked up this morning. I plan on making green beans, mashed potatoes, stuffing and gravy. I always keep it low fat. I’ll steam the green beans along with some red pepper strips and serve them simply with sea salt, coarse ground black pepper and a lemon squeeze, Earth Balance and gomasio.    I’ll mash the potatoes with salt and pepper, a little almond milk and coconut powder and some Earth Balance spread. The gravy I’ll make using mushrooms and an organic brown gravy mix. The stuffing will be bread crumbs, roasted mushrooms, onion, celery, apple, diced dried apricot with fresh rosemary, sage and thyme. I may add eggplant and I may stuff it into red peppers. Neither the man nor I are dessert eaters, so no pies, but the sweet/sour element will be an cranberry orange and apricot chutney made with onion, bell pepper, allspice, cayenne, cinnamon, cloves, cardamon, apple cider vinegar and fresh shaved ginger.  I usually spend holidays working but Thursday, I’m just going to relax and bask in how thankful I am for this life I’ve been blessed with.